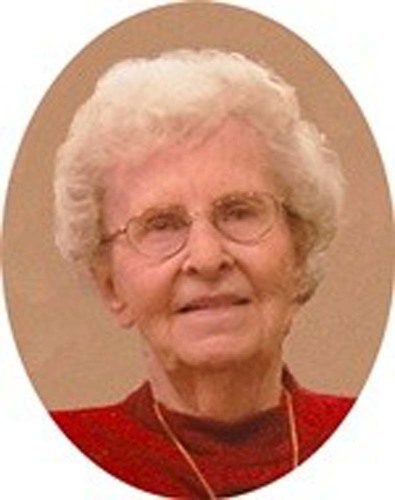 ROCHESTER, MN: Esther A. Owen, 88, died Sunday, March 28, 2010 at Maple Manor Nursing Home in Rochester, MN. Esther was born January 2, 1922 to Frank and Minna (Flugge) Arndt in Alta Vista, IA. Esther worked as a waitress for the Maindiner Cafe, New Hampton, IA. This is where she met and later married Gordon "Gordy" Owen on October 19, 1945 in Alta Vista, IA. The couple lived in the Waterloo area for over sixty years. Gordy died on July 25, 1975. Esther also worked for many years as a waitress-cashier at the Electric Park Ballroom in Waterloo. Esther enoyed gardening, cooking, fishing, and entertaining her friends and family at her home. She was a long time member of Zion Lutheran Church in Waterloo. In 2005, she moved to Maple Manor Nursing Home in Rochester. Esther is survived by her son; Daniel J. (Jo) Owen, Rochester, MN, three grandchildren; Stacy Hogle, Raymond, IA, Kristi (Mike) Rinne, Geneva, IL, and Meredith (Michael) Clark of Rochester, MN, seven great grandchildren; Stephanie, Matt and Nicole, Samantha, Erin, Karli, and Jenna, and her sister; Dorothy Schreiber, Monticello, MN. She was preceded in death by her parents, husband Gordy, a daughter Donna, two brothers Carl and Leo, and four sisters Mamie, Hattie, Rose, and Verna.A Funeral Service will be held at 1:00 p.m. on Monday, April 5, 2010 at Zion Evangelical Lutheran Church in Waterloo, IA. Visitation will be from 4-6 p.m. on Thursday, April 1, 2010 at Ranfranz and Vine Funeral Homes in Rochester, MN and one hour before the service at the church on Monday. Burial will be at 3:00 p.m. on Monday at the Garden of Memories Cemetery in Waterloo following the funeral service and a luncheon at the church.

The attached photos are added to the memorial of Esther Alvina Owen to help share their legacy.