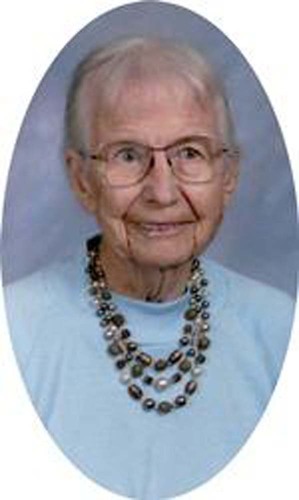 ROCHESTER, MINN: Esther M. Merry, 95, died Wednesday, May 26, 2010 at Season's Hospice. Esther had been a resident at Madonna Meadows Assisted Living for the past five years until her move to Season's Hospice for the past few weeks.Esther Martha Schuldt was born March 30, 1915 on a farm in Jefferson Township, Houston County, Minnesota to William and Dora (Isacksen) Schuldt. After graduating from Caledonia High School in 1935 she attended teacher training in Spring Grove, MN for one year, and then taught in a one-room school house for a year on Peacock Ridge. After deciding to change careers, she attended the nursing program at Rochester State Hospital in 1937 and graduated in 1940. On August 22, 1940 she married Francis E. Merry at the Little Brown Church in Nashua, IA, and made their home in Rochester, MN. He preceded her in death on July 31, 1979. Esther worked as a Registered Nurse at Rochester Methodist Hospital from 1947 until her retirement in 1977. She enjoyed fishing and quilting.Esther is survived by two daughters, Elaine (Terrance) Paske and Lois (Steven) Law, both of Rochester, MN; two grandchildren, Sharon Harrington of Zumbro Falls, MN and Steven (Michelle) Merry of Waterloo, IA; two great grandchildren, Kayla and Keenan Merry of Myrtle Beach, SC; two sisters, DeLaris (Robert) Weiss of Overland Park, KS, and Phyllis (Lee) Jensen of Bullhead City, AZ; and a sister-in-law, Frances Schuldt of La Crescent, MN. Esther was preceded in death by her husband Francis; a daughter Judith; five brothers, Arnold, Harry, Henry, Charles Edward, and Barthel; and four sisters, Helen Luttchens, Blanche Schaller, Margaret Schroeder, and Evelyn Wuennecke.Funeral Services will be at 11:00 a.m. on Tuesday, June 1, 2010 at Evangel United Methodist Church. Visitation will be one hour before the service at the church. Burial will be in Oakwood Cemetery. Memorials are suggested to Evangel United Methodist Church, Madonna Meadows Living Community, or Season's Hospice. Ranfranz and Vine Funeral Homes, 5421 Royal Place N.W. Rochester, MN 55901, 507-289-3600, www.ranfranzandvinefh.com.

THE BEST AUNT ANYONE COULD ASK FOR.
SHE WILL BE MISSED FOR MANY REASONS, MOST OF ALL HER HEART.

The attached photos are added to the memorial of Esther Martha Merry to help share their legacy.