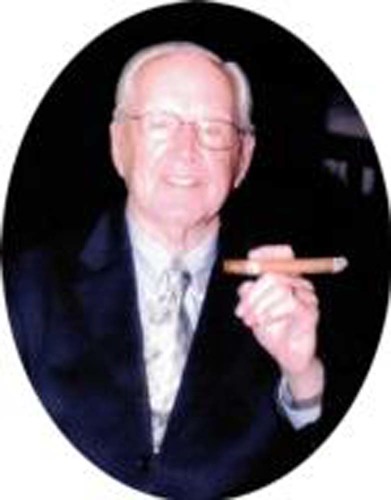 NELSON, ELMER EDWARD, age 90 of Rochester passed away peacefully at his home on Saturday, October 16, 2010 surrounded by his family. Elmer was born July 10, 1920 on the Canadian border in Wales ND. to Berhard T. Nelson and Hulda (nee, Kuball) Nelson Romberg. He was the middle of eight children. The family moved to Rochester in 1936. He graduated from Rochester High School in 1940. In 1942 he married Delores Marie Langseth on November 21, 1942 at the Wilshire Wedding Chapel in Los Angeles CA. Elmer was preceded in death by his parents Benhard T. Nelson, Hulda Nelson Romberg, step-father Fred Romberg, a sister Glorine, brothers Victor, Roy, Lloyd, Don, a son Larry Edward, granddaughter Lysandra Nelson, daughter-in-law Lucile Nelson, and his wife of almost 60 years Delores Marie who died March 22, 2002. Elmer was a veteran of World War II, 465th Weapons Battalion, 94th Infantry Division of Patton's Third Army. He is a survivor of the Battle of the Bulge. In 2004, the 60th anniversary of landing at Normandy, his son Dale took him back to Europe to retrace his steps in the war. In May 2009, Elmer was a member of the Rochester Honor Flight to Washington, DC to see the war memorials with Dale as his chaperone. After the war Elmer returned to Rochester and worked for the Minnesota Highway Department and then as a surveyor for Ken McGhie Engineering. He was a mail carrier for the Rochester Post Office. Elmer and Delores owned and operated Rochester Blue Printing Co. and Nelson's Leech Lake Landing. He worked for Rochester Public Utilities, retiring in 1984 with 25 years of service. Elmer was an avid sportsman, enjoyed hunting, fishing, camping, boating and an occasional great cigar. Elmer was a skilled craftsman in wood and metal with many other interests. Elmer could fix anything. He was a life time member NRA, and Rochester Sportsman Club. To all who knew Elmer, he was fun loving, had a wonderful sense of humor, a loving husband and father. He taught his children the joy of the great outdoors. Elmer also had many wonderful river friends from years of camping and boating on the Mississippi River. His was a life well lived. He is survived by a son Dale (Ann), Lake City, MN, and a daughter Carol Nelson Teske, Washington,IL. Grandchildren Christopher (Suzanne Spiegelberg) Teske, San Mateo, CA, Laura (Jason) Bowers, Morton, IL, Laetitia Nelson, Lake City, MN. Great grandchildren Sydnie, James and Sienna Bowers, and many loving nieces and nephews. He is also survived by one sister Winifred "Dolly" Pedersen, Seattle, WA and one brother Gordon Nelson, Fargo, ND. A special caring friend Bonnie Czaplewski of Rochester and Elmer's extended family through Bonnie, Bill (Susan), Jenna, Adam and Adrienne Czaplewski of Winter Park, FL, Brenda (LeRoy), Allyson, Bridget and Brittney Kanz of Rochester, MN, Lynn (John) Maggard of Nelson, MO, and John (Shannon), Christopher, Julia and Nicholas Czaplewski of Winona, MN. Our special thanks to the very professional and caring staff of Seasons Hospice. Memorials may be made to Seasons Hospice. A Memorial service will be held at 11:00 a.m. on Wednesday, October 27 at Ranfranz & Vine Funeral Home, Rochester. MN. Visitation will be one hour prior to the service at the funeral home. Luncheon to immediately follow the service with interment at Grandview Memorial Gardens.

You will always be Remembered,  and Missed,  and

THE NELSON FAMILY,  as well as your very Special Beautiful

and Pretty Granddaughter Lysandra Nelson,  Who I First Met in

Glades Middle School in the Early Month of May 1992,  in

Miami, Florida,  who I Loved,  and Cherished with all my Heart, &

All my Soul,  May God Cherish, & Bless You and The Nelson Family.

Dale, Ann and Family, We were so saddened to read of Elmers passing. What a wonderful person. We all loved him and will never forget our memories of your parents as our neighbors in Wabasha. We were so fortunate to have them and to get to know their family. We are unable to attend the service today as our daughter is flying into the Mpls airport and we will be on our way to pick her up. You all our in our thoughts and prayers.
Roy Sutherland Family

Please accept our sympathy during this time of loss.

Elmer always made me feel as if I was part of his family. When my son Jason and I met Elmer, we had just lost my father. Elmer helped us fill the void of of our loss.

We always knew when we were with Elmer,we would have lots of laughs.

I believe he was the most interesting man/person I have had the opportunity to meet. And for that I am very thankful. I/we will miss him.

I'd like to think that you'll be telling God one of your great stories about now. Miss you already!

For Carol and her family:
So sorry for the loss of your Father and Grandfather.
The memories that you have made will sustain you in the times to come.
Since my Dads passing I think of him dailey and talk to him often, and these simple things kep us close.
Take Care and God Bless.

I had a couple of brief encounters of "visits" by Elmer and his very special friend Bonnie, at Bonnie's sister's home, Teresa Knopick. From my conversations with Elmer, I was very impressed with his heroic experiences in WW11. He seemed like quite a wonderful and accomplished man that really loved his family and friends.

My condolences go to his entire family, and also to Bonnie C.whom I am acquainted with through Teresa Knopick, my very special friend. Also, I want to include Bonnie's family, as I know they looked upon Elmer as "family".

Mike and I send our sympathies to all of you on Elmer's passing. Mike enjoyed the chats he had with Elmer on his experiences in World War II. He was glad to have had the opportunity to meet such a nice man.

I am sorry that I won't be able to attend Elmer's memorial. I have parent/teacher conferences all day on Wednesday.

Love to you all and our condolences,

The attached photos are added to the memorial of Elmer Edward Nelson to help share their legacy.