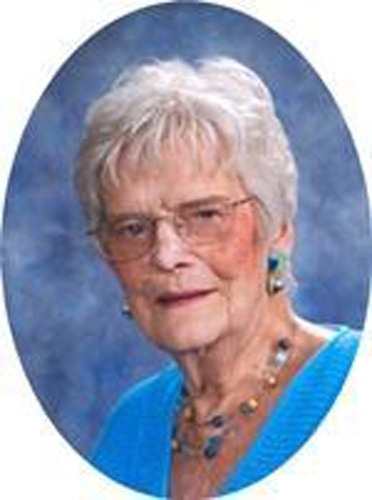 ROCHESTER, MINN: Mary Lou Klongerbo, 81, died Wednesday, November 24, 2010 at Season's Hospice surrounded by family. Mary Lou Krans was born March 23, 1929 to John and Frida (Backman) Krans in Bagley, MN. She graduated from Bagley High School and later worked in Bagley, Chicago, and Minneapolis until she married Merlyn Klongerbo on June 26, 1948 in Bagley, MN. The couple lived in Estherville, IA for nineteen years where she raised her family of four. They moved to Clear Lake, IA where she worked as the secretary for Sunset Elementary School for ten years. They moved to New Ulm, MN and she worked as the secretary for Our Savior's Lutheran Church. Following her husbands' death in 1988, she moved to Rochester and has lived here since. Mary Lou was an avid reader of news and books; she enjoyed studying the atlas and working crossword puzzles. She was an enthusiastic Minnesota Twins and Vikings fan. Mary Lou volunteered at Gloria Dei Lutheran Church, Madonna Towers, and Widowed Person's Service. She was a member of Gloria Dei Lutheran Church. Mary Lou is survived by her two daughters, Janet (Bruce) Ludwig, Rochester, MN and Karen (Michael) Margitan, Rochester, MN; her son, Ross (Terri) Klongerbo, Winter Park, FL; seven grandchildren, Michael (Liz) Faris, Jennifer (Jeff) Feece, Kristin Klongerbo, Benjamin Klongerbo, Anne (Steve) Schaffer, Sara Klongerbo, Luke Klongerbo; six great grandchildren, Emily, Zachary, Rachael, Grahm, Benjamin, Luke; and her sister, Janet Stenborg, Vernon Hills, IL. She was preceded in death by her parents, her husband Merlyn, a son Robert, three sisters and one brother. She will be missed by her many friends from (WPS) Widowed Persons Services. A Funeral Service will be held at 11:00 a.m. on Wednesday, December 1, 2010 at Gloria Dei Lutheran Church. Visitation will be held from 5-7 p.m. on Tuesday, November 30, 2010 at Ranfranz and Vine Funeral Home and one hour before the service at the church. Burial will be in Oakwood Cemetery. Memorials are suggested to Season's Hospice, Mayo Hospice, and the American Cancer Society. Ranfranz and Vine Funeral Homes, 5421 Royal Place N.W. Rochester, MN 55901, 507-289-3600, www.ranfranzandvinefh.com.

Karen and Mike, my thoughts and prayers are with you and your family as you are grieving the loss of your mother. May you cherish the special moments you shared with your mom and keep her memory forever in your heart. Peace to you. Jen

Janet Ross & Karen,
My heart is filled with all good memories of our times together. Know that this is not goodbye to Mom, but it's see you later. Hold the good memories.
God Bless

You are in my thoughts and prayers,
and you have my deepest sympathy.

To Karen-Sorry to hear of your mom's passing, but glad you had precious time together before she went to her heavenly home. Remember this is only a temporary separation and she is at peace. If you need a friend to talk to, my cell is 507-259-9806. My thoughts & prayers to you-Judy Davis

Karen and Janet, my thoughts and prayers are with you and your family. Your mom will be remembered for the big heart she had for others. I wish you all a peaceful holiday season knowing that your mom is now in the arms of our heavenly father. Love ya, Ann Trelstad

We were so sorry to hear about your Mom and may you enjoy all the memories from her life. Our sincerest sympathy to all of you.


It's been many years since I last saw your mom, think it was when she was pregnant with the twins and Henning (my stepfather), Jane and myself were visiting them in Iowa (I think). We have enjoyed our e-mails over the last couple of years and she was so passionate with her political views. Of course it made it better because they were ours also!!

Dear Karen, Janet, Ross and family,
I am so sorry for your loss. Mary Lou had a great laugh and spirit. I hope she did not suffer and know her time with you all was what was most important to her. Take Care.
Sincerely, Rita Wilczek

My sympathy to all of Mary Lou's family.
She was so good about keeping me informed about the Klongerbo family over the years. I am so glad I got to see her at Allen's funeral this past year. Now there aren't many of her generation left in the Klongerbo family. Blessed be her memory.
In Christ,
Faye Klongerbo Mackowick

Our sincere sympathy is with the Klongerbo family. Karen, I know how much your Mom meant to you, and how much you meant to her as well. May God's loving care guide you through the days ahead. Our thoughts and prayers are with you.

Karen,
I am so sorry about the loss of your mother. May joyful memories come quickly to heal your loss. I still remember the pink roses your Mom sent me when I was doing a play in high school - what a sweetheart - just like you.
My thoughts are with you and your family. Love, Sherri

Karen and Mike, I am so sorry to hear about your mom. You are in my thoughts and prayers.

I was sorry to hear of the death of your mom. I have many good memories of her when we all lived on Maple Crest Drive in Estherville.

Over the years my mom saved her cleverly typed notes and I always looked forward to reading her messages when I would go home to visit my parents.

My thoughts and prayers are with all of you during this difficult time.

We will certainly miss Mary Lou and her cleverly written e-mails and letters. She shared a lot of interesting stories with us which always brightened our days. Our prayers and thoughts are with the Klongerbo family in this time of sorrow.

We extend our deepest sympathy to Mary Lou's family. She was a great lady and will be missed by many.

Your wonderful memories will carry you through this time of sorrow. She is now walking with GOD. Let HIM comfort you everyday. You are in our thoughts and prayers.

The attached photos are added to the memorial of Mary Lou Klongerbo to help share their legacy.