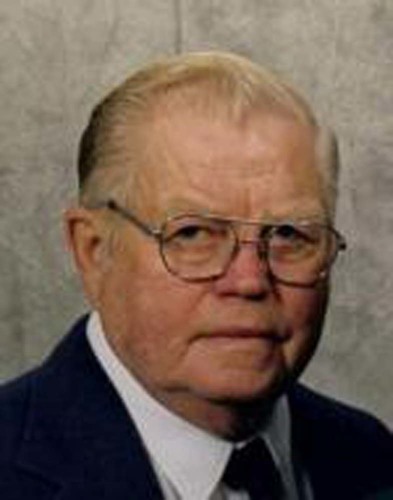 BYRON, MINN: Harris T. Olson, 82, died at his home on Saturday, December 25, 2010.Harris T. Olson was born August 6, 1928 in Whalen, MN to Theodore and Myrtle (Hoff) Olson. He attended Diamond Creek country school in rural Whalen, MN and later served in the Army as a paratrooper during the Korean War. Harris married Joyce E. Harkness on January 30, 1954 at Cross of Christ Lutheran Church in Houston, MN. He worked for Winona and Rochester Monument Company's before starting Olson Lettering Service and Monument Company. In addition to engraving final dates on monuments for many local funeral homes, he did custom sandblasting; address markers for homes, fireplaces, and many stone signs, including the Byron High School, Byron American Legion, Post 119, the Byron Sewage Plant and Christ Lutheran Church in Byron where he was also a member. There are many pieces of his engraving work around southeastern Minnesota, Iowa and the five state area. Harris also worked for Mayo Clinic as a custodian and retired in 1991 after twenty-two years of service. He continued to operate his monument company with his grandson until the time of his death. Harris was a member of the Byron American Legion, Post 119 and the Rochester Eagles Club. He enjoyed fishing but loved to spend time with his children, grandchildren and great grandchildren.Harris is survived by his wife Joyce Olson, Byron, MN; his four daughters, Dawn (Tim) Nemechek, Byron, MN, Teal (Bob) Erwin, Rochester, MN, Lynn (Ken) Mohlke, Rochester, MN, and Missy (John) Woodward, Kasson, MN; his son Erik (Jean) Olson, Rochester, MN; ten grandchildren, six great grandchildren; his two sisters, Eunice (Dick) Hepfel, La Crosse, WI, and Marcella (Gordon) Nelson, Rushford, MN. He is also survived by many nieces and nephews. He was preceded in death by his parents, three sisters, Judith, Mavis, and Julieanne, and his four brothers, Wallace, Truman, Paul, and Curtis.A Funeral Service will be held at 11:00 a.m. on Wednesday, December, 29, 2010 at Ranfranz and Vine Funeral Homes' Chapel. Visitation will be held from 4-7 p.m. on Tuesday, December 28, 2010 at Ranfranz and Vine Funeral Home and also one hour before the service at the funeral home. A private family burial will be held at a later date. Ranfranz and Vine Funeral Home, 5421 Royal Place N.W. Rochester, MN 55901, 507-289-3600, www.ranfranzandvinefh.com.

I am so sorry to hear of Harris's passing.

He was a great man. I will always remember how kind he was to me when Tom died. His work on the marker will be cherished forever.

I am very sorry for your loss.

We are thinking and praying for your whole family.
God bless you.

The world just lost one of the most kindest men I have ever met. Thoughts and prayers to all.

My thoughts and prayers are with you Dawn as well as your whole family. What a great guy!!!!

The attached photos are added to the memorial of Harris T. Olson to help share their legacy.