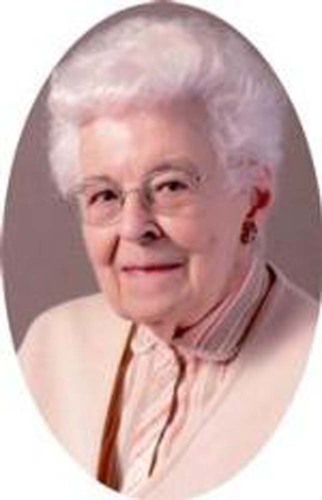 ROCHESTER, MINN: Elizabeth Eleanor Hanenberger, 95, died peacefully Wednesday, December 29, 2010 at the Charter House in Rochester after a brief illness. She was born September 21, 1915 in Rochester, MN to Lester J. and Anna Eleanor (Kenitz) Fiegel. She attended Hawthorn Elementary School, Central Junior High School and Rochester High School graduating in 1932. In 1934, she graduated from Rochester Jr. College with an A.A. Degree, and graduated from the University of MN. in 1936 with a B.A. Degree in music majoring in piano and organ. Elizabeth performed her Senior Piano Recital at the University of MN. School of Music Auditorium and also her Senior Concerto with the University of MN. Orchestra at the Coffman Memorial Auditorium. From 1933 to 1934, she was organist at the Center Street Methodist Church in Rochester. In 1936 she was organist at the funeral for Dr. William W. Mayo. From 1936 to 1952, Elizabeth was organist for the Congregational Church in Rochester. She was also a piano and organ teacher for five years. On May 27, 1939, she married Harold John Hanenberger of Rochester, MN at the home of her parents. In 1940, she co-founded Hanny's Mens Wear with her husband, Harold. From October, 1943 to April of 1946, she managed Hanny's store while Harold served in W.W.II in the China Burma Theatre and continued partnership in Hanny's Mens Wear until retirement in 1962. Elizabeth was an avid golfer, winning numerous tournaments and trophies at the Rochester Golf and Country Club. She was a charter member of the original Rochester Music Club, the Congregational Church of Rochester, and the Rochester Golf and Country Club. She enjoyed music, needlecraft, golf, birdwatching, reading, sports, and seeing her two grandchildren. Elizabeth is survived by her daughter, Elsbeth Ann Benidt of Colorado; one grandson, Matthew M. Benidt of Phoenix, AZ; one grand-daughter, Heather E. Benidt of Colorado; two sisters, LaVone Stutz Wheelock (Francis) of Rochester, and Audrey Higgins Garbisch (Dick) of Rochester and Florida; one brother Lester J. Fiegel, Jr. (Jackie) of Austin, TX; one brother-in-law Marvin Hanenberger of Green Valley, AZ; two sisters-in-law Rotha Schumann of Eyota, MN and Reefa Hanenberger of Laguna Woods, CA; and numerous nieces and nephews. She was preceded in death by her husband, one brother, and one sister. A Funeral Service will be held at 1:30 p.m. on Tuesday, January 4th, 2011 at the Congregational Church, 974 Skyline Drive S.W. Rochester, MN. Visitation will be held one hour before the service at the church. Burial will be in Oakwood Cemetery, Rochester. Memorials may be directed to the Congregational Church or donor's choice.

I grew up right next door to this fine woman in the late 1950's and early 1960's on 15th Avenue SW. She and Harold were both wonderful neighbors, and they contributed to some childhood memories that will continue to be cherished.

The attached photos are added to the memorial of Elizabeth E. Hanenberger to help share their legacy.