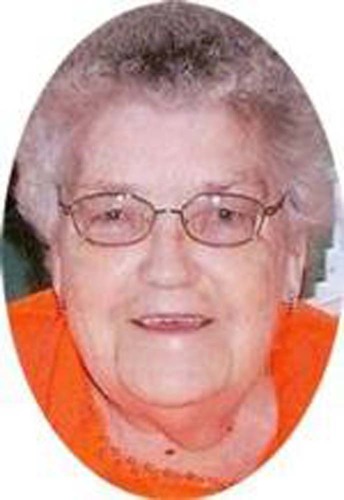 ROCHESTER - Lorraine "Lolly" M. Meldahl, 84, died on Wednesday, December 29, 2010 at Samaritan Bethany Heights in Rochester. Lorraine was born in Norway Township on May 10, 1926 to Bennie and Ruth (Byboth) Johnson. She married Alvin Meldahl on August 7, 1948 in rural Peterson. Lorraine worked as an elementary teacher, a special education teacher, an apartment manager, a store manager at Fannie Mae, a motel desk clerk, and she was also a farm wife. She enjoyed dominoes, camping, reading, going for car rides, and collecting angels and moose. Lorraine especially loved spending time with her family. Lorraine is survived by three daughters, Barb (David) Wolfe, of Marysville, OH, Cheri (Craig) Korte, of Gettysburg, PA, and Lori (Jeff) Colwill, of Rochester; three sons, Dale (Joyce) Meldahl, of Racine, MN, Scott Meldahl, of Pine Island, MN, and Brian (Dawn) Meldahl, of Brownsdale, MN; a sister, Clarice Westby, of Rushford; two sister-in-laws, Ann Johnson, of Rochester, and Mavis Dragvold, of Whalan, MN; a brother-in-law, Paul Meldahl Sr., of Chatfield; 16 grandchildren and 13 great grandchildren.Lorraine is preceded in death by her husband, Alvin; a son, Dean; her parents; and a brother, Gordy.A Funeral Service will be held at 2:00 P.M. on Monday, January 3, 2011 at Highland Prairie Lutheran Church, 43267 Bowl Drive, in rural Peterson, MN with Rev. Wade Davick officiating. Visitation will be from 1-5 P.M. on Sunday, January 2, 2011 at Ranfranz and Vine Funeral Home and an hour prior to the service at the church. Burial will be in Highland Prairie Cemetery in rural Peterson.

It was a shock for me to learn that Lorraine passed away. I have known her since the first day of country school. We were classmates in that one room school house. We attended High School together also. My wife, Amazette, also a classmate in high school, were very good friend during their high school years.

I wish to send my sympathy to all and wish I could have been there to do it in person. I know she is being missed.

Brian and Family, Sorry for your loss.You all are in our thoughts and prayers.God Bless you all,Mark and Carol

The attached photos are added to the memorial of Lorraine Marie Meldahl to help share their legacy.