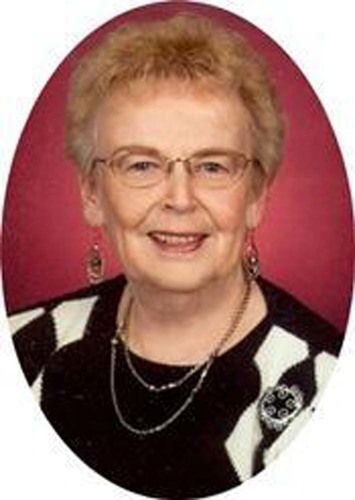 ROCHESTER- Joyce Louise Jorgenson stepped into glory and into the arms of her loving Savior on Thursday, March 10, 2011 in Rochester, MN. She is survived by her loving husband of 45 years, Lenny and countless friends and family members whose hearts are broken.Joyce was born in East Chain, MN, on November 10, 1937, to Louis and Junnis Riegel. The family later moved to Fairmont, MN, where her brother, John, was born. Joyce graduated from Fairmont High School in 1955 and moved to Minneapolis where she pursued a career as an executive assistant. On May 28, 1965, she married Lenny Jorgenson and the couple moved to Rochester where she remained until the Lord called her home. In Rochester, Joyce worked at O'Brien Law Firm for many years and was an active and cherished member of Evangel United Methodist Church of Rochester.In addition to Lenny, Joyce is survived by two sisters-in-law, Joan Riegel of Chicago, IL; and Hildred Nelson of Fairmont, MN. She will be forever loved and missed by special cousins and sisters-at-heart, Petra Marquart and Vina (Karl) Marquart, both of Minnetonka, MN. She will be greatly missed by her stepchildren, Nancy (Chet) Starkey of Crescent City, CA; Jean (Duane) Murray of Estherville, IA; and Donald (Denise) Jorgenson of Granada, MN. Joyce will be missed by grandchildren, Rosie; Charlie (Amanda) Starkey; Eugene (Misty) Starkey; Victor (Lanie) Starkey; Donald (Leslie) Starkey; Marisa (Kevin) Larson; Leland (Justine) Starkey; Ella Starkey and special friend, Chris, all from Crescent City, CA; Jerry Murray and Todd (Aprile) Murray both of Estherville, IA; Jason Murray and special friend, Jessi of San Antonio, TX; and Cpl Ryan Murray, USMC, Camp Pendleton, CA. Joyce had a special relationship with her nieces and nephew and they will remember her fondly, Dawn Riegel and Kim (Jake) Wills, both of South Elgin, IL; and nephew Stephen (Melany) Riegel of Denver, CO. She also enjoyed spending time with her numerous nephews and nieces in the Fairmont and Buffalo, MN area. She will be remembered with love as "Nana" by great-grandchildren, Logan, Tianna, and Jaelyn Murray of Estherville, and will be missed by many great-grandchildren from Crescent City; along with her great-nieces and nephews, Teghan, Thane, and Tate Wills, and Ellie and Daniel Riegel. Many other friends and family members too numerous to mention who loved Joyce will remember the sunshine and laughter she brought into their lives.Joyce was preceded in death by her parents; brother, John; a stepson, Jerry Jorgenson; numerous aunts and uncles; and grandparents.Visitation will be held 2:00-4:00pm Sunday, March 13, 2011 at Ranfranz and Vine Funeral Home 5421 Royal Place NW, Rochester, MN. A memorial service will be held at 2:00pm Monday, March 14, 2011 at Evangel United Methodist Church 2645 N. Broadway, Rochester, where the family will receive friends from 1:00pm until time of service. Rev. Jeff Utecht will be officiating.Joyce is going home to be laid to rest next to her mother, dad, and brother in Pleasant Prairie Cemetery next to the old family church, formerly St. Paul's, in East Chain, MN. at a later date. Ranfranz and Vine Funeral Homes 5421 Royal Place N.W. Rochester, MN 55901 507-289-3600 www.ranfranzandvinefh.com

Joyce you were the best! Always had a smile. She was always ready for a game of cards or dominoes. She was always concerned about others and would help if she could. Life won't be the same without you. Maxine

The attached photos are added to the memorial of Joyce Louise Jorgenson to help share their legacy.