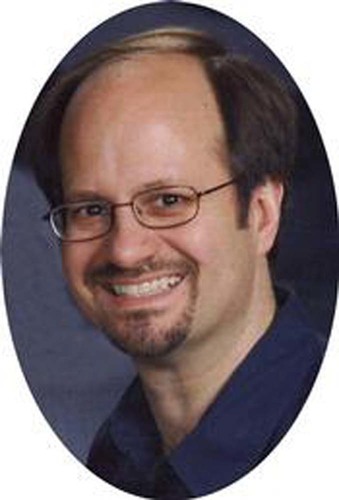 A funeral mass for David L. Merbach, 46, of Rochester, MN will be at 11:00 am on Wednesday, March 30, 2011 at Pax Christi Catholic Church with the Rev. Joseph Keefe officiating. Visitation will be from 5:00-8:00 pm on Tuesday, March 29, 2011 at Ranfranz and Vine Funeral Homes and also one hour prior to the service Wednesday at the church. Cremation will follow the funeral mass.David Lynn Merbach was born on October 3, 1964 in Breckenridge, MN to Lawrence and Kathryn (Gross) Merbach. He died on March 27, 2011 at Rochester Methodist Hospital.David graduated from Claymont High School in Uhrichsville, OH in 1983. He attended North Dakota State School of Science from 1983-1985 and graduated with an associates degree and later graduated from North Dakota State University in the fall of 1987 with a degree in Electrical Engineering.David worked for IDA in Fargo, ND for one year and started with IBM in Rochester, MN in 1988. David married Sarah Stockert in Dickinson, ND on May 17, 1991 and they made their home in Rochester where Sarah is the Director of Pharmacy at Olmsted Medical Center. From 2000-2001 David worked for IBM in San Jose, CA. David was a senior engineer at IBM in the Tivoli storage division as a product architect. David was a Master Inventor and had 25 patents, which was the eighth plateau. David was a member of Pax Christi Catholic Church and was involved with RCIA and as a catechist instructor. Dave's greatest passion was scuba diving and traveling. He was PADI certified in Monterey, CA in 2000 and as a dive master in 2006. He was past president and current editor of the Rochester Snorkel and Scuba Club.Survivors include his wife, Sarah Merbach of Rochester, MN; his daughter, Monica Merbach and his son, John Merbach, both at home; his father and step-mother, Lawrence Merbach and Renelle Bertsch of Wahpeton, ND; his mother, Kathryn Merbach of Dennison, OH; his brother, James (Michelle) Merbach of Troy, MI and his sister, Stephanie Bertsch-Merbach of Denver, CO. David was preceded in death by his sister, Linda Merbach, his grandparents, and his mother's special friend, George Ellis.Dave had a painful and intense struggle with cancer the last nineteen months, but also the triumph of love, caring, hope, family commitment and the determination to "keep on keeping on" day to day, always looking for new options, never giving up and an ever present thankful attitude. Dave was a man blessed with great strength, faith, determination, a powerful and positive attitude, a great sense of humor and a wonderful, loving and caring family. Memorials can be directed to Pax Christi Catholic Church or pmppals.org

Our deepest sympathy to your family. Our prayers are with you all.

Sarah,
My deepest condolences to you and your family and my sincere admiration for the strength you have shown through this challenging time.
Tammy

Larry and Renelle and family ,
I was sorry to hear about your loss of your son. My thoughts and prayers are with you at this time. Myrna

Dear Sarah & Family,
We have continued to pray for all of you the past several months and are very sorry to hear that David has lost his battle to fight Cancer. Our sympathy is with all of you and we will continue to pray that you have the strength to deal with each day forward.
Thoughts & Prayers from
The Sirek's
Joel (Class of 1984) Tami Parker &
Brooklyn

As Renelle has shared with me David's struggle over the last six months, I feel as though I know him. He seems to have had a wonderful spirit that touched everyone he knew. Please know that I, and my entire newsroom, are thinking of Larry, Renelle, Sarah, Monica and John, as well as his siblings and mother.
My sympathies in this incredibly tough time.

Please accept my sincere sympathy for your loss. Please know that my thoughs and prayers have been with you during this trying time.

Although your loss brings you much sorrow, may you find peace and joy in Christ's love for you today and in the days ahead. God bless and keep you.

My sympathies go out to your family.

I was shocked to learn of Dave passing away. He was an extremely graceful and talented software professional. One who was always willing to go out of his way to share his knowledge with those who asked him. I am very sorry for your loss and my prayers are with you.

Sarah and family, I am so sorry for your loss. I know David fought hard to stay here with you all. Thinking of you and saying a prayer for all of you as you cope without him. Shirley

Sarah and kids-
I am so sorry for your loss of a dear husband and great dad-you have all been through so much but you've also done it together. Take care of each other, cry together, share memories and laugh together. There is no more "normal"-you will all find a way to grieve and hold your memories dear to your heart. Peace to you all.

My sympathy to all of Dave's family. I was privileged to be Dave's English teacher at Claymont, and he was such a joy to have in class. He was one of the best, and I am sorry for the loss.

We were so sorry to hear of David's passing. We know he fought valiantly but God decided He needed him more. We send our sincerest condolences to all. Deland remembers Dvid wanting to be a mugician when David was young, and marveled at his inventions and career. Be blessed that we were able to know David for the time he had on this earth, and he will live on in our hearts.

Dear Sarah, Monica, and John, Our words cannot express how we are sorry--but we want you all to know that Dave was so loved and that he will always be remembered. We love you all and are praying for you all during this very difficult time.

I had the pleasure to work with Dave. He was an inspiration to me. I will never forget the kindness he showed me and the repect that I earned from him.
I am very sorry for your loss,

Yesterday I learned of the unfortunate and untimely death of David. I cannot possibly imagine the shock and sorrow that has been thrust on your family.
I will always remember our fond memories of working together in IBM. It is true that he was taken from us too soon, and I think you share my sentiment that it feels a little unfair that such a smart and talented young man's life has ended with so much living left to do.

Sarah, Monica and John, I am sorry to hear of your loss. I have worked briefly with Dave at IBM and I do know that he was very highly respected throughout IBM. Please accept my deepest sympathies.

Let it be known that we have followed you and your family in this nasty journey, didn't have the words to let you know at the time. Please find peace knowing that Dave is now without pain. He will be greeted by some people that were fond of Dave!!

The attached photos are added to the memorial of David Lynn Merbach to help share their legacy.