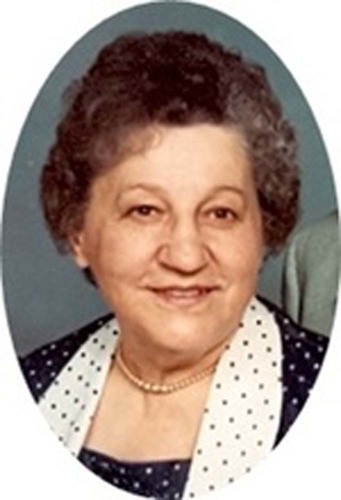 Frances Madeline Leier was born February 19, 1916, at St. Alexis Hospital in Bismarck, North Dakota. Her parents were Joseph Leier and Clara Gross Leier of Napoleon, North Dakota. She was orphaned at age 14 and put herself through 4 years of nursing college, graduating at age 19. She graduated from nurses training in Devils Lake, ND and moved to Rochester, MN to work as a RN at St. Marys Hospital until she married Robert W. Fox on June 3, 1941, the day Bob graduated from St. Olaf College in Northfield, MN. They lived in Sioux City, Iowa, Traverse City Michigan, Rochester and Douglas, Minnesota, Kelso, Washington, and Winsted Minnesota before moving to Pine Island, Minnesota, in 1949, where they owned and operated a grocery store.

When Mrs. Fox was a teenager, she and her sister Christine sang for KFYR, the Bismarck, North Dakota radio station. She also sang with the Lawrence Welk band when he was starting out in North Dakota.

In 1953, Mrs. Fox received a personal thank you letter from Helen Hayes for her involvement in getting Pine Island to be the first town to start the March of Dimes campaign to fight polio. In 1993, the Pine Island Jaycees presented her with the first Bill Mahlke award for community service in Pine Island.

Mrs. Fox was the first school nurse hired to work for the Pine Island School district. She worked there for over 25 years. She was a member of the American Legion Auxiliary for over 60 years and she was awarded a lifetime membership. She was also a member of St. Elizabeths Circle, the Progress Club, Pine Island Advisory Council, co-founder and Secretary of the Pine Island Food Shelves, charter member and life member of NEA School Nurses Organization, historian of Pine Haven Auxiliary. She sang with the Pine-ears and the St. Michaels Church choir. She and her husband delivered Meals on Wheels for many years. Her husband was the mayor of Pine Island for 5 terms and she accompanied him to many functions and events. She enjoyed singing, crossword puzzles, reading and travel. She would feed the birds in her yard and her son has continued on with this tradition.

The funeral for Frances M. Fox will be at 10 a.m. Saturday, October 8th at St. Michaels Catholic Church in Pine Island, with Father Randal Kasel officiating. Visitation will be held from 9 a.m. to 10 a.m. on Saturday, at the church. Burial will be in the Pine Island Cemetery.

So sorry to hear of your Mother's death.  Our sympathy to your family.  Jim and Phyllis (Goplen) Maxwell

The attached photos are added to the memorial of Frances Madeline Fox to help share their legacy.