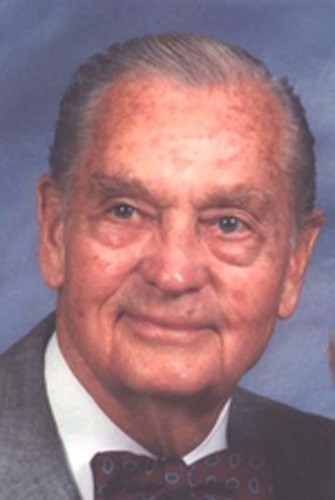 Dr. Lowell Lawrence Henderson, 95, died at Charter House on Jan. 7, 2012. Interment will be in the columbarium of St. Lukes Episcopal Church in Rochester. A memorial service will be held at St. Lukes at 11 a.m. on Saturday, Jan. 14, with the Rev. Douglas Sparks officiating. A light lunch will be served following the service.

Dr. Henderson was born on April 22, 1916, in Kokomo, Ind., where he grew up and graduated from high school. He received his A.B. and M.D. degrees from the University of Indiana. On Oct, 28, 1939, he married Anna Margaret Shaffer of Burrows, Ind.

After his internship in Indianapolis, the family moved to Rochester where he began his residency in internal medicine at the Mayo Clinic. He served in the U.S. Army Medical Corps from 1944-1947, predominately in the Panama Canal Zone. After World War II ended, he returned to Rochester to finish his training. In 1948 he received an M.S. degree in medicine from the University of Minnesota. From 1948-1952, he was on the staff at Carle Clinic in Urbana, Ill. In 1953 he became a consultant in Allergy at the Mayo Clinic. He attained the academic rank of professor and was the chair of the Division of Allergic Diseases and Internal Medicine from 1970-1979.

His research interests were related to the immunology of allergic diseases. A pioneer in reporting pollen counts, he designed and built the first tool used to gather pollen in Rochester.

Dr. Henderson was a founding member of St. Lukes Episcopal Church. He was a volunteer for the Girl Scouts of America and Mayowood. He installed First Help units for the disabled.

After retirement in 1981, he pursued his interests in etymology, stamp collecting, the stock market, traveling, fishing, reading and woodworking.

In addition to his wives, he was preceded in death by a daughter, Margaret Ann Smalling, and a sister, Elsie Frances Henderson.

The family wishes to express their appreciation to his compassionate caregivers from Home Instead and Charter House.

Memorials are suggested to St. Lukes Episcopal Church, the Mayo Foundation for Education and Research, or the charity of the donors choice.

The attached photos are added to the memorial of Dr. Lowell Lawrence Henderson to help share their legacy.