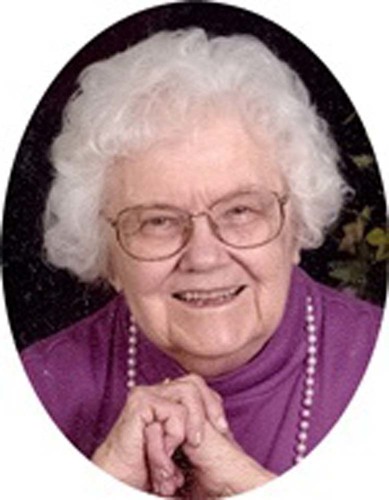 Serena Dorothy Garbisch (Jeche) was born to Doretha Meta (Woltmann) and Otto Jeche on July 24, 1921 in Wykoff, MN.She grew up on their family farm with her two sisters, Ruth and Dorothy, and her brother, Donald.She attended St. John's Lutheran Church in Wykoff, MN, as a child and young adult.She attended St. John's Parochial School and the country school during her 1st grade through 8th grade.She was a high school student at Wykoff High School and graduated from there on June 1, 1940.From 1943-1950, she worked in the Accounts Receivable Dept. at the Schusters Department Store in Milwaukee, WI.She moved back to Minnesota in 1950 and started working in the Foundation Office, Plummer Building at Mayo Clinic.

On July 24, 1954, she married Edward Carl Washington Garbisch at Trinity Lutheran Church in Rochester.She was a mom to three children, Paul, Susan, and Mark and grandma to Erica, Alissa, Cassandra, Christopher, and Joshua.For over 25 years, she was a children's day care provider.She enjoyed spending time with her family, attending family gatherings, family reunions, and traveling.She was gifted in decorating her home, needlework, cooking, and baking.She had a green thumb for growing indoor plants.At Trinity Lutheran Church, she was a member of their choir, Altar Society, a greeter, and she also visited shut-ins.As years went by, she spent many hours reading her Bible, devotion books, and other Christian readings that brought comfort and peace.Singing hymns and other songs brought joy to her life.

In February 2008, she became a resident at Samaritan Bethany Heights in Rochester.She enjoyed the good music programs that were held in the home and became a member of their choral group, rhythm band, and bell choir.In May 2011, she moved to the facility at Samaritan Home on Eighth.On July 24, 2011, she celebrated her 90th birthday.

As a family, we are most grateful for the loving care from the certified nursing assistants, nurses, homemakers, hair stylists, household coordinators, social workers, OT and PT therapists, chaplains, van drivers, and other workers and volunteers from Samaritan (Station Two and Bamber Valley House) and the opportunities she was able to take part in as a member of the Samaritan family.We also thank the Season's Hospice caregivers for their compassionate care of her since October.Also thank you to Claire Vomhof, lay minister at Trinity Lutheran Church, Pastor Haak, and Pastor Otte for their many visits and prayers during her stay at Samaritan.

I am truly sorry for your loss.  I remember when my mother passed, it was a very difficult time.  My thoughts and prayers go with you and your famil in this time of need.

To Susan and Mark:

We would like to express our sympathy over the loss of your mother and my Aunt Serena.  Our thoughts are with you at this time.  May God bless you and your families and I am sending hugs to all of you.

I have fond memories of family reunions at Serena's house in Rochester.  I am sorry to hear that she is gone and I pray that God provides comfort to those she has left behind.  God's peace to you.

The attached photos are added to the memorial of Serena Dorothy Garbisch to help share their legacy.