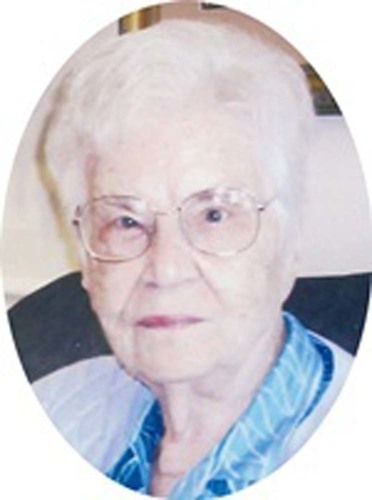 Rochester- Gertrude B. Luckow, of Rochester, MN went to be with the Lord on January 10, 2012. She was born in Waubay, SD on August 22, 1909 to Julius and Elizabeth (Schoenbeck) Reich. The family moved to Butler, SD where she attended school and graduated from high school in 1928. She attended Northern State Teachers College in Aberdeen, SD and earned a teachers certificate. She taught school for 7 years, starting in a one-room country school in Day County, SD, and then in Butler. On June 12, 1936, she married Marvin F. Luckow, son of Albert and Minnie (Hormon) Luckow, in the Butler Evangelical Church, where they were members. She taught Sunday school and Marvin served on the church board for many years. They owned and operated a general merchandise store in Butler for 9 years. In 1947 they moved to Rochester, where Marvin was a carpenter. In the early 1950's they moved to Webster, SD where they owned and operated a rural meat delivery service. They returned to Rochester in 1955 and Gert started working in sales at Masseys, retiring in 1978.

We rejoice and take comfort in the knowledge that she is forever at home and in glory with the Savior that she faithfully served. She touched the lives of many with her gentle, calm, and encouraging nature and the ability to see the good in everyone.

Sincere Sympathy goes out to the family of Gert's family. I worked with Gert at Massey's & kept in contact years following as I took care of Mildred Ogilvie.  We would talk with Gert on the phone and she loved reminiscing about the days at Massey's.  I always admired the love between Gert and Marvin as he would drop her off and pick her up.  I sent her a card on her "100th" and she certainly was a lady. May you find comfort in remembering all of your thoughts of her.  Helen Peter

I remember Gert with much affection, she took me under her wing when I started at Massey's. I know she thought the world of her nieces as she would talk about you. It is very hard when someone has been a part of your life for so very long, but you have my sympathy. She was a great lady.

The attached photos are added to the memorial of Gertrude B. Luckow to help share their legacy.

Please help memorize Gertrude B. Luckow by recording your attendance below.