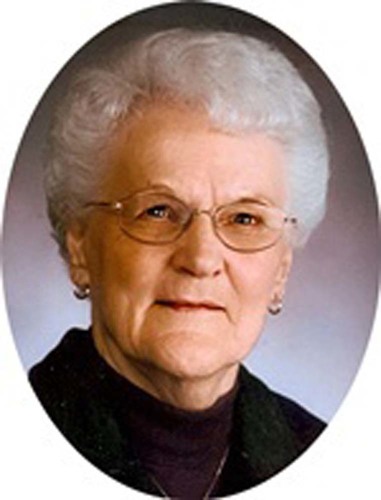 ROCHESTER -Jean C. Gronseth,87, peacefully entered Heaven on Saturday, Janaury 28, 2012 at Samaritan Bethany Home on Eighth with her family at her side.

Jean Carol Johnson was born on February 24, 1924, the third of seven children to Selmer and Cora (Martin) Johnson in Sargeant, MN.She was baptized on May 18, 1924 and confirmed in the Christian faith on May 21, 1939 at Evanger Lutheran Church in rural Sargeant.She attended school in rural Sargeant.

She married Charles Martin Gronseth on October 5, 1944 and they had three children from their union, Dennis, Linda, and Carol.Chuck passed away on May 13, 1972.Jean was a homemaker caring for her children and dedicating herself to her daughter, Carol.She was instrumental in giving Carol the special education available to her.Jean worked in the cafeteria at Libby's for many years and then in food service at St. Marys Hospital after which she joined Security and retired in 1990 with 17 years of service.

Jean was a meticulous seamstress, sewing clothes for herself and her young children and grandchildren.Her talents with a needle and thread also included crocheting, embroidery, cross-stitch, and craft projects.Her most recent passion was quilting.She lovingly stitched more than one quilt for each of her family members.She also made numerous baby quilts for the Faith Chest for the newly baptized at Christ Lutheran Church in Byron, where she was a charter member.

Jean is preceded in death by her husband, Charles; a son, Dennis; her parents, Selmer and Cora; a brother, Orville Johnson; and three sisters, Marcella Schulz, Audrey Holien and Clarice Elverum.

A Funeral Service will be held at 11:00 A.M. on Wednesday, February 1, 2012 at Christ Lutheran Church, 201 Frontage Road NW in Byron with Rev. Steve Rheingans officiating.Family and friends may visit from 4-7 P.M. on Tuesday, January 31, 2012 at Ranfranz and Vine Funeral Home and an hour prior to the service at the church.Burial will take place at Byron Cemetery.

Linda and David Grande and family,

Our sincere sympathy in the loss of mother.

The attached photos are added to the memorial of Jean Carol Gronseth to help share their legacy.