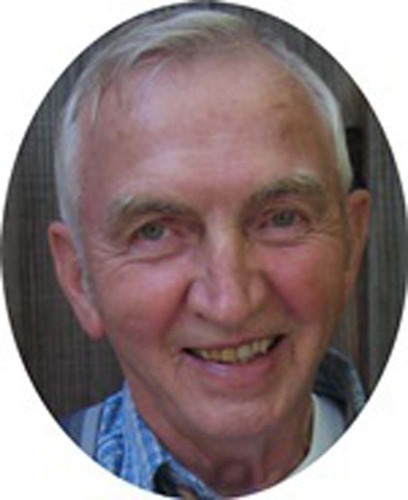 Howard was born in Fosston, Minnesota, on October 27, 1933, to Carl and Alma Olson.After graduating from high school, he set off and found work as a merchant seaman on the Great Lakes until he enlisted in the U.S. Army in 1953. He served in the 11th & 82nd Airborne Divisions until 1956.After returning home, he trained as an auto mechanic then found related work in Glacier National Park and the surrounding areas of Montana.In 1965, he moved to Rochester to begin his 28-year career with IBM.During that time he met and married his wife, Marita, and started a family in the countryside near Douglas.

Howard was an extremely active, curious, and giving man.When not working at IBM, he was a hobby farmer, backhoe operator, mechanic, and general fix-it man.He avidly volunteered his time and talents helping friends, neighbors, church members, and the community.Howard always took time to learn and teach, especially when supporting 4-H activities. Howard had a lifelong love of horses, and in his retirement he was a member of the Pine Island Saddle Club and enjoyed many trail rides. He was also a member of the Douglas United Methodist Church, the Mechanical History Roundtable, and the Rochester Area Parkinsons Support Group.

A Memorial Service will be held at 11:00 A.M. on Monday, August 19, 2013 at Ranfranz and Vine Funeral Home with Rev. Rick Phillips officiating.Visitation will be an hour prior to the service at the funeral home.Burial will take place at the Center Grove Cemetery in Douglas.

We are sorry to hear about the loss of Howard. He was a great man who accomplished many things during his time here.

A memory that I have of him. I remember when I was an early teenager, Howard and Marita mentored me as I went through confirmation at the Douglas Church. There were many times when I would spend time with Howard feeding and grooming the horses that he loved so much. He taught me many things about those animals and also how to be a good man and to keep my faith.

I only wish that I could have kept in touch over the years.

Our prayers go out to your family.

We're sorry for your loss of Howard, and we know he has appreciated all your loving care through the challenging times he's had with PD. Our Lord will now take care of him. Blessings and sympathy to you all.

My sympathy to you as you grieve the death of Howard. Remembering the times he helped Bill with the haying and also the 4-H years. May God bless you with His peace and comfort.

Dear Marita and family.  What a wonderful family Howard was blessed with and vice -versa!  In my heart I feel he felt that also.  I'll always remember his smile and his sense of humor, even on some of his bad days he would give us a smile. God bless you all annd even tho none of you, including Howard , wanted his last days to be at MM, thank you for sharing him with us!     Always, Heidi

Just sharing a memory of stopping in at Maple Manor when Howard had a roommate named Charlie. We were talking about cars. Charlie remembered having a Model-A. Then I asked if they had liked to drive fast when they were young guys. Charlie said, "Oh, no, not that fast." So I said to Howard, "How about you?" Howard got this great big smile on his face and said, "Well, probably."

Our best to the family,  Elyse and Kim Russell

Howerd was a good friend during our years at IBM.God bless Howard and his family

The attached photos are added to the memorial of Howard Glenn Olson to help share their legacy.