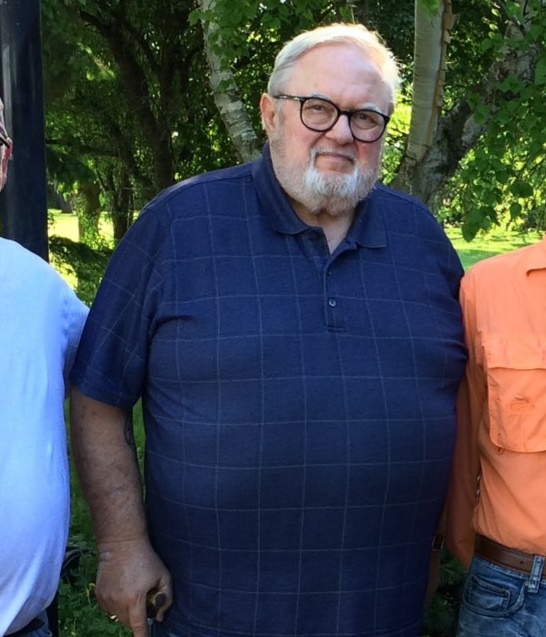 They say that sometimes you eat the bear, and sometimes the bear eats you. In Dave Miller's case, sometimes you eat the walleye, and sometimes the walleye eats you. This past Sunday, Dave was fishing at his favorite fishing hole way up in Canada. It was a beautiful and peaceful day. The birds were singing, the sun was shining, and the water was still. Dave was sitting in his boat minding his own business enjoying the day and whistling a cheerful tune. Suddenly, he caught the grandpapa of all walleyes on his hook. He recognized it as the same walleye he had battled as a child. They made eye contact, locked eyes, and an epic battle, the likes of which nobody has ever seen ensued. Dave fought the walleye, and the walleye won. Thus, Dave's life ended with a fish story that is getting bigger by the day. It was definitely an Uffda moment. Dave died doing what he loved to do.
David Michael Miller was born on April 28, 1945 and died on July 29, 2018. He was raised by his parents Marlow (also known as MW) and Lenore Miller in Fairmont, Minnesota. By his own admission, Dave was a complicated man. There was a lot in this world he did not understand. He married Jeanne Miller (nee Elliott) in her hometown of Okauchee, Wisconsin at St. Joan of Arc Parish on June 18, 1966. They were married for 52 years. Together, in Fairmont, they raised their four children, Kerry Miller Zachman (married to Adam Zachman), Kimberly Miller Lockrem (formerly married to Mike Lockrem), Kathy Miller Link (married to Michael Link), and Michael Miller (married to Kari Hyatt Miller). He doted on and was very proud of his grandchildren who include Andie, Josie, and Sadie Zachman, Anna and Ryan Lockrem, Harlowe Miller, and step-grandchild Trevor Link. Dave and Jeanne's beloved dog Ebby died last year, and Dave often spoke fondly of his childhood dog Doxie the Dachshund.
Dave's greatest personal accomplishment was that he quit drinking on February 14, 1985. He was sober for 33 years when he passed away. Before he retired, he was a chemical dependency counselor, and helped the lives of many others. Dave and Jeanne founded Common Ground, an outpatient treatment center in Rochester, Minnesota. Dave was a proud friend of Bill W.
Dave will be remembered for his sense of humor, often wickedly inappropriate, and always hilarious. Dave's children will attempt to carry on this legacy, and that will be easier for some than others. Dave's wife and family will remember most of all his uproarious laughter, and impeccable timing of jokes. They will remember most of all that life and relationships were not easy for Dave, and despite that, he always did the best he could, and taught his children to do the same. Dave loved to fish, he loved restaurant dining, he loved to travel, and he loved his wife and family (sometimes exactly in that order, but not always). Dave would want his family and friends to celebrate his life, and not mourn his death. There will be a celebration of Dave's life on Saturday, August 4, 2018 from 4 pm to 6 pm at Ranfranz & Vine Funeral Homes, 5421 Royal Pl NW, Rochester, MN 55901. In lieu of flowers, please send well wishes or memorial contributions to Jeanne Miller, c/o Kerry Zachman, 13125 Arthur Street, Rogers, MN 55374.
When Dave wrote down his final wishes, he included this poem:
I'm Free (Author Unknown)
Don't grieve for me, for now I'm free.
I'm following the path God laid for me.
I took his hand when I heard his call,
I turned my back and left it all.
I could not stay another day,
To laugh, to love, to work, to play.

Tasks left undone must stay that way,
I've found that peace at the close of the day.

If my parting has left a void,
Then fill it with remembered joy.
A friendship shared, a laugh, a kiss,
Ah yes, these things I too will miss.

Be not burdened with times of sorrow,
I wish you the sunshine of tomorrow.

My Life's been full, I savoured much,
Good friends, good times, a loved one's touch,

Perhaps my time seemed all too brief,
Don't lengthen it now with undue grief.
Lift up your heart and share with me,
God wanted me now, He set me free.
Let us all lift up our hearts together and honor Dave. He has shuffled off to catch the bus, he had a good run, and he is free.

Dearest Jeanne and family;
Our thoughts and prayers have been with you during
this very difficult time in your life with the loss
of your dear loved one.
Dave will be missed very much but remembered
forever for all the many lives that he touched along
his journey of life.
Gil and I will treasure the memories that we made
over the years with both of you!!!!
God Bless You Jeanne!!!!!
Much Love and Appreciation......
Gil and Char

My grandfather loved to tell David Miller stories! ..& my my Grandmother is quite possibly the Welcome Wagon Lady of Heaven. I hope you are able to find comfort with all of the rich memories🌟

Godspeed Dave ~ you never failed to say hi to me and ask how I was doing every time we saw one another over the last 22 years. You will be missed, but never forgotten!

Dave hired me at the heights and he has been always a wonderful caring man to others. Miss you and your smile Dave. We will meet again.

God Bless the Old Bear! I loved working with him and Jeanne. Warmest Hugs and Much Love to Jeanne and family. Leslyan Bremer Burton

Dave will always be one of the "old guard" in the chemical dependency treatment world of Rochester. He will be remembered for his passion for helping those struggling to get well and for yes, fishing and for his humor. He made a difference in this world.

Our thoughts and prayers go out to the family during this time of sorrow. May God's grace embrace you now and in the days and months to come as you come to peace with Dave's passing. Sincerely, Greg Jasmer and faimly

My heart pours out to all that know and love Dave. He was a blessed man. He will live on in our hearts for the wonderful person he has been and for all the lives he has touched in so many ways!

I am sorry to hear of your loss, Dave did doing what he loved and may you find peace with that. Gary Mills

The attached photos are added to the memorial of David Miller to help share their legacy.

Please help memorize David Miller by recording your attendance below.

Thank you for sharing your memory of David