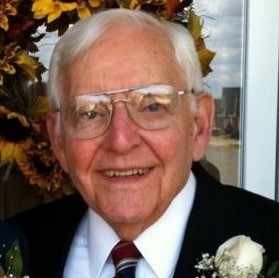 John Marshall Long
Age 91, of Rochester, MN entered heaven on October 26, 2019 at Mayo Clinic Hospital, St. Mary's Campus in Rochester, MN. He was diagnosed with chronic subdural hematoma on October 24, which required surgery to remove blood from his brain's surface. While in recovery he became unresponsive, and died peacefully less than 24 hours later, as his wife of nearly 59 years tenderly whispered goodbye. We rejoice though our hearts are breaking.
He was a lover of Jesus, a Husband, a Father, a Grandfather, a Great Grandfather, and Friend to countless people.
John Marshall was born July 28, 1928 to parents Samuel J. and Maude Leigh (Everett) Long in Norfolk, VA. He was the youngest of eight children, which included Virginia, William, Eloise, Samuel, Joseph, Richard, and Martha. He was named after the fourth Chief Justice of the United States Supreme Court.
John attended the First Church of the Nazarene in Norfolk, VA as a child, where he grew in his faith in Jesus Christ, and was baptized in the Elizabeth River. He graduated from Matthew Fontaine Maury High School in Norfolk, Virginia in 1946. He went on to receive his bachelor's degree from William and Mary, a master's from Michigan State and a doctorate degree from the University of Virginia.
During the Korean War he served in the Air Force as 2nd Lieutenant, and remained in the Air Force Reserves rising to Captain. He resigned in 1962 when he and his family moved to Little Rock in 1962 to become professor of Biometry and Assistant Dean for Research at the University of Arkansas Medical School. In 1971 he went to the University of Minnesota as an Associate Professor of Surgical Sciences and Computer Science. He has an extensive bibliography of publications in medical research and computational medicine.
In retirement he and his wife moved to Murfreesboro, TN in 1993. He was active in Rotary, volunteered at the Stones River Battlefield, and fostered his love of trains. He authored the book A Ribbon of Steel to document the realization of his lifelong dream to ride the train around the world.
He was an accomplished professor, a lover of trains and travel, and outlived many of the lifelong friends he made during your 91 years living in Norfolk, Minneapolis, and Murfreesboro. For those who are still here, we're heartbroken.
John is survived by his wife Luella Clemens and three adopted children: Samuel Long of TN, Leigh (John) Schilling of MN, and Paul (Staci) Long of MN; five grandchildren: Aleigh (Hector) Munoz, Billie Hanson, John Owens, Emily Kahnke, Henry and Greta Long; great grandchildren Mateo, Nikko, Tayden, and Riley; and sister Martha Prince. He is preceded in death by parents Samuel and Maude, and his four brothers and two sisters.
More than anything, John loved Jesus first and his wife only slightly less. He sacrificed so much for his family demonstrating to everyone he met what love looks like.
"And now these three remain: faith, hope and love. But the greatest of these is love."
Dad, we are rejoicing in the hope that all of your greatest dreams of heaven didn't measure up to what you're experiencing now. We love you; have a good time and behave yourself.
Funeral services will be held on Sunday, November 3rd at 2:00pm in Rochester, MN at Ranfranz & Vine Funeral Home. Interment will be held at a later date in Norfolk, VA. Memorials, in lieu of flowers, may be made to True Life Church in Rochester, MN, or the Rotary Club.

3 people have supported the family by purchasing them flowers or gifts from the Healing Registry.

I go back a long time in Berkley, Virgiinia!!! Our families lived at one time next door to each other on Walnut Street.........we attended the same Nazarene Church..........we were all a family, names like Long, Byrum, Kanaday, Smith, Barefoot, Harrison, Garrison, Hodges, Midgette, Cox, Thorpe, etc. My dear Lou and family, John's obit was in the Virginian-Pilot last Sunday.........He was a wonderful, delightful Christian man.......and possessed a great sense of humor. I send my love, thoughts and prayers to you and your family as you mourn his passing.
Love, June Faye Byrum Robbins

Please accept our deepest sympathy.. We knew John from the Victory Class in Nashville, TN.

The attached photos are added to the memorial of John M. Long to help share their legacy.

Thank you for sharing your memory of John