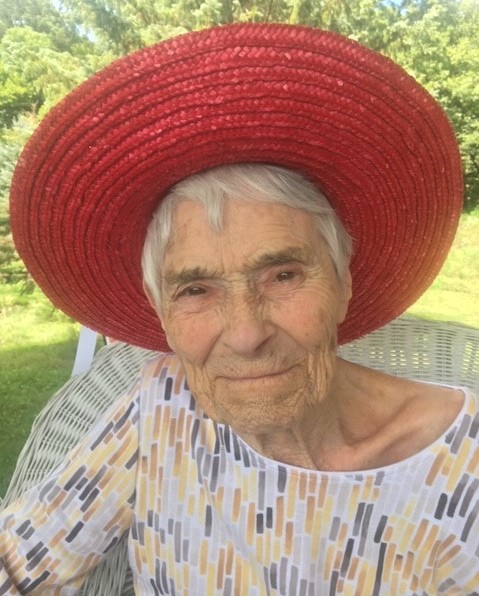 Jean McGill, a successful commercial artist as a young woman and later a prolific and passionate gardener, theatrical set and costume maker, rock and leaf collector, English-as-a-Second-Language teacher, and volunteer for artistic and immigrant causes over a span of 62 years in Rochester, died on Wednesday, Feb. 5 at age 97.

A native of Sanford, Maine, the daughter of a textile mill machinist and a school teacher, Jean came to Rochester in 1958 as the wife of a young Mayo physician, Douglas B. McGill. They'd met when she was a commercial artist in Boston, where she designed department store windows and painted murals in restaurants and hotels, and he was a medical student at Tufts College School of Medicine.

After marrying in 1953, the couple lived first in Boston, and then for two years in Châtellerault, France, where Douglas served as a U.S. Army Captain and physician at a U.S. military base. By the time they moved to Rochester, Jean and Douglas had four children--Douglas, Bruce, Frances, and David.

In Rochester they raised their family in the Memorial Parkway, Homestead Addition, and Pill Hill neighborhoods. The four children and their playmates in all these neighborhoods grew accustomed to being sketched and painted by Jean in her artists' notebooks with colored pastels, charcoal pencils, and acrylic paints.

In the 1960s and 1970s, Jean taught painting, papier-maché, and pottery classes at the Rochester Art Center and put on puppet shows, using marionettes and hand puppets of her own creation, at local churches and schools. She had sketched, painted and made marionettes and hand puppets since she was a young girl, and after high school she attended the Portland School of Fine and Applied Arts, and the Vesper George School of Art in Boston.

At the Rochester Civic Theater she made costumes and built sets for plays and musicals during the tenures of RCT director James Cavanaugh, and technical director and set designer, Don Jackson.

Through the 1970s and 1980's, Jean continued her artistic pursuits while developing a strong interest in helping newly-arrived immigrants to Rochester get settled and accustomed to American ways. Working as a tutor to Hmong refugees who settled here after the Vietnam War, Jean taught hundreds of Hmong to speak their first English words and phrases. As a friend and confidant, she spent countless hours visiting Hmong homes where she taught Hmong women how to shop for groceries, ride bicycles, take public buses, and how to dress in American styles.

Once, she visited a Hmong home where the family, during their first days in the U.S., hadn't yet learned know how to heat their house. So Jean taught them that day how to use both the thermostat and the fireplace.

The friendships Jean formed during these years lasted for decades as the Hmong parents whom she taught over time became grandparents, and their children grew up, graduated from school, and started families themselves.

Certainly Jean's most overwhelming passion was as a loving and protective mother to her four children and three grandchildren. She showered endless caring attention and full support to her entire family, and her family of friends, in countless ways.

Around 2000, Jean began to experience spells of forgetfulness and garbled speech, which over the next two decades developed into a full-blown cognitive dementia.

Yet throughout this period and to her last days, Jean continued to be highly observant and creative, making art with small things at hand including paper, hand towels, kitchen utensils, and beautifully arranged rocks, leaves and flowers.

These creations, along with compelling Zen-like phrases she spontaneously uttered for several years during the middle years of her dementia, are collected in an online presentation, "The Leaf Artist" (leafartist.tumblr.com), that went viral online.

One of her enigmatic dementia phrases popped out once when she'd just left her home, looked up a the sunlit blue sky that was dotted with cotton-white clouds, and said: "Everything! There it is! It's beautiful!"

She is survived by her four children, Douglas of Rochester; Bruce of Minneapolis; David of St. Paul; and Frances of Barcelona, Spain; by her grandchildren Conor, of St. Paul; and Gala and Connie, of Barcelona; by her niece, Ricky Christenson, of Turner, ME; and her nephew, Marcus Darby, of Wells, Maine.

A celebration of life will be held at 11 AM on Saturday, March 7 at the Ranfranz & Vine Funeral Home (visitation from 10-11 AM). In lieu of flowers memorials are suggested to the Oak Valley Home in Rochester.

Ranfranz and Vine Funeral Home is honored to be serving the McGill family. To share a special memory or condolence, please visit www.ranfranzandvinefh.com .

To Doug and your siblings, I send my condolences. I did not know your Mom well, but I liked what I knew.
She was a talented and kind lady, and as Nancy said , she was a very cool person.

Frances and Bruce, I am so sorry for your loss. My thoughts and prayers are with you and your family. Kathy Kaehn, the twins from Rochester. Now in living in Austin, Tx

Oooooooooooooo the sadness... Jean McGill was probably the coolest mom in the neighborhood. She welcomed all, encourage creativity, loved curiosity and appreciated everything. I remember being her assistant when she ran the kindergarten at the Universalist Church at 3rd & 3rd SW - especially when we made and then used puppets to tell stories! So many memories of her and her joy in all things art and her ability to always make things fun.

My parents cherished two paintings by her - an oil painting and a water color - crafted during my untold hours of sitting still as her subject. And now I cherish them... as I cherish the memory of a wonderful woman, neighbor and friend. The world has lost a great one...
Nancy Bateman - Dallas

I am so sorry for your loss. I had the pleasure of meeting Jean “Mama” when I visited my daughter Ashley at work. She was an amazing lady. Thoughts and prayers to you all.
Beth Gransee

The attached photos are added to the memorial of Jean McGill to help share their legacy.

Please help memorize Jean McGill by recording your attendance below.

Thank you for sharing your memory of Jean