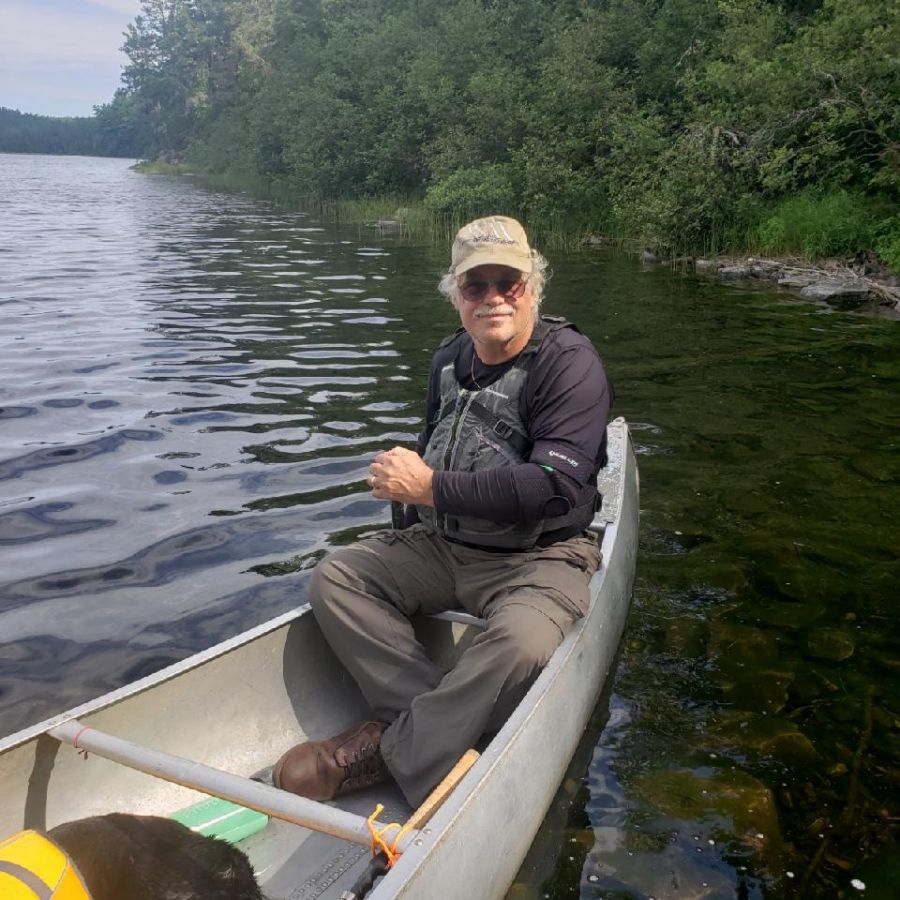 Allen was born September 6, 1956 in Tulsa, Oklahoma to Robert and Mary (McCormick) Rench. He attended Bell Jr. High School, was a 1974 graduate of Will Rogers High School in Tulsa and went on to obtain his degree in engineering/computer science from Oklahoma State University in 1979. On March 20, 1993, in Arlington, TX, Allen married Dianne Marks. Allen grew up among the Indian Nations and was very involved with the Pawnee Indians. He was very active over the years with the Boy Scouts of America, receiving his Eagle Scout rank as a youth, he went on to serve as Cub Master and Scout Master of Pack 178 in Grand Prairie, TX, Troop 591 in Arlington, TX, scout leader of 498 in Rochester, MN and Scout Master of 29 and 98 in Rochester, MN. Allen was also a Girl Scout leader and camp dad for Rainbow Roads Council, Grand Prairie, TX. He was a member of the Order of the Arrow, alumni and past president of the Charles L. Sommers Canoe Base Alumni Association, and received the George D. Hedrick Volunteer Service Award. Allen was a member of Autumn Ridge Church in Rochester, MN, where he was also very active in men's Bible study. While he was in Arlington, TX, Allen also was a children's Sunday school teacher and Bible study teacher at St. Andrews United Methodist Church. He and Dianne also opened up their home over the past 20 years hosting AFS and YFU exchange students, building relationships all over the world. Allen was an avid sportsman and had a love of teaching youth outdoor skills, especially canoeing and paddling. He was an avid paddler with the paddle name of the Pink Panther. Allen was always building something to make it better, he enjoyed hunting and took pride in being a pit master. He was a music enthusiast, and enjoyed all genres of music. He built jukeboxes and even played the violin. Allen had a candid personality, was kind, thoughtful and always put others first. He loved to laugh, was a master of dad jokes and took great pride in making connections with people and keeping people connected. Allen also loved traveling, antique MG cars, scuba diving and had an interest in flight aviation. Allen always had a smile on his face and an optimistic approach to life. He was a great husband, father, grandfather and brother.

Memorial services will be held in Rochester, MN, Tulsa, OK and Arlington, TX at later dates. Memorial contributions made be made to Deer Lake Canada Church Planting in care of Autumn Ridge Church, 3611 Salem Rd. SW, Rochester, MN 55902 or to the Charles L. Sommers Alumni Association, P.O. Box 428, Ely, MN 55731. Ranfranz and Vine Funeral Home is honored to be serving the Rench family; to share a special memory or condolence please visit www.ranfranzandvinefh.com

Wishing you peace and sending you hugs. Christina Block

I am so sorry to learn of the sudden passing of Allen. Dianne and family, I pray God's love and comfort will surround you in this time of grief. Know you will celebrate his life on earth and now in heaven. My sympathy and prayers, Nancy

Allen and his father were big people in my life as a canoe guide; Bob taught me riveting (among many other things), and Allen was most of all the kind of person who made everyone around him smile. (I always wondered if he was exaggerating when he told me he had a sister named Crescent and a dog named Monkey.) I was privileged to share several years of guiding with him and the rest of that great staff. What a joy to be around!
My most sincere condolences to Allen's family; I cannot imagine the hole that has opened in your lives.

We had lost touch with each other, but I know we will meet again. Red eye!

Allen was one of the biggest contributors to Sommers Alumni Association, and the best of volunteer Scouting, for decades, with the enviable loving partnership of beautiful Dianne. It really hurts to loose one of the good guys, especially so prematurely. Best wishes to his fine family for a lifetime of fond memories of an outstanding Scout!

Condolences to all of Allen's family and friend. I'm sure this is a terrible time for all as he was a tremendous individual who made a difference in everyone he was with. Tragic loss and a life well lived although too short. My connection: I have a son who was on staff for 4 years who also did a trek as a youth. I too was a scoutmaster and a former Eagle Scout. Sincerely thinking about him and all of his family. Mike Sliva

I have known Allen since 1979 when I first worked for Northern Tier/Sommers Canoe Base. During my career working for Northern Tier from 1982 to 2011 Allen was in contact with the staff for all kinds of projects and reunions. He was always looking for was that he could benefit the program and the staff.
He will be sorely missed by all who knew him. Condolences to his Diane, children, loved ones, and all his friends in the CLS Alumni Association.

I had the pleasure of working with Allen as his recruiter on his most recent positions. Allen actually was my very first placement so he will always hold a special place in my heart. Allen was so smart, and was an absolute pleasure to work with. He bent over backwards for me, and was always available to talk. I leaned on him quite often for technical advice and I cant thank him enough for all of the help he provided, when he didnt have to. I send my condolences to his family and loved ones. Allen was a gift to this earth and may he rest in peace.

Dad Allen you will always be existing in my most warm and happy memories.❤

I lost a friend, brother, and adventure companion this past week. His legacy lives. Looking forward to the reunion.
"But when this perishable will have put on the imperishable, and this mortal will have put on immortality, then will come about the saying that is written, 'Death is swallowed up in victory. O death, where is your victory? O death, where is your sting?'
"The sting of death is sin, and the power of sin is the law; but thanks be to God, who gives us the victory through our Lord Jesus Christ.
"Therefore, my beloved brethren, be steadfast, immovable, always abounding in the work of the Lord, knowing that your toil is not in vain in the Lord."
~ 1 Corinthians 15:54-58

I’m so sorry to hear of Allen’s untimely passing! Praying for God’s peace and comfort for you all. It was my good fortune to serve in scouting with Allen and benefit from his vast experience!

Hey, Quinton sorry for your loss, I was happy to get to know your father when I worked up at Northern Tier in the Maintenance Dept.. May the Lord, be with you and your family during this difficult Time... Bob Amitrano...

Allen will be sorely missed on Manchester Lane! I enjoyed he and Dianne taking me out on their boat this summer, and their friendship. He truly was a man who could fix and invent anything! I know he helped us on 4420 with a few things.
I am so sorry for his loss and know that we have a new angel watching over us!!!
RIP Allen. Love, Karen

We are so very sorry for your family's loss. If there is anything we can do to ease your burdens, please let us know. Our prayers are with your family during this difficult time.

Diane and family,
Caring thoughts and prayers are with you.
Michael Pagelkopf

Allen was clearly a good father to his children and loving husband. His spirit will live on in all that he gave to those he loved and supported. I will hold your family close in my prayers during this shocking loss. Please feel free to call me and come over any time you need to talk. I have a townhome in Rochester now and would love to see you anytime, Dianne. We will support Tate in any way we can. Love and tears, Diane, Nick, Theresa, and Ben

Margaret and I have know Allen for a long time, starting with his days in Texas. He was always the most inventive man, one who would take on a project and figure it out while I was trying to follow along. When I worked at Radio Shack, he developed an external drive for an early laptop that blew the laptop buyer away. We went skiing together in Beaver Creek one year and ended up in a blizzard on the way back where the roads were closed and had a great time when our families holed up on a Holiday Inn waiting for the thaw. He donated so much of his time to the Boy Scouts and the church and did so for his whole life. I remember when he met Dianne and was so happy that he had found his true soulmate. I was fortunate to visit him and Dianne back in 2015 at their home in Rochester and back here in Texas on a visit. My life was enriched by knowing Allen and being his friend. May you rest in peace, my friend.

Our favorite memory of Allen was one of the 'fix it man.' Any toy our children had that broke, they insisted be sent home with Dianne for Allen to fix. The toys always came back stronger then ever and virtually proven to almost be unbreakable again.
Our deepest condolences to the entire family. We are still in shock.
Love, The Pirkl Family

The services for James have not yet been added. Please sign up below to be notified when the services are ready.

The attached photos are added to the memorial of James Allen Rench to help share their legacy.

Thank you for sharing your memory of James