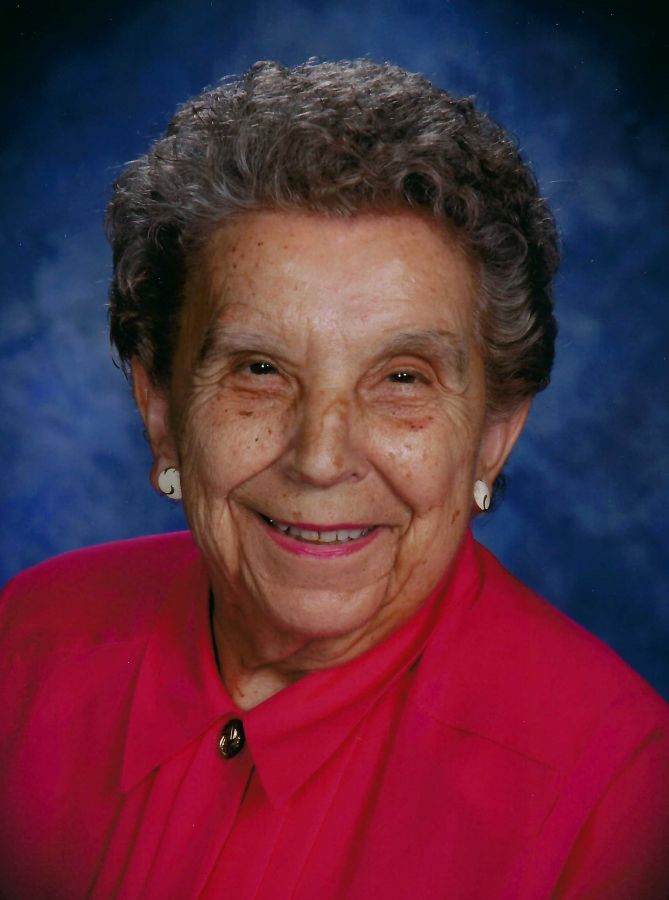 Leona Louisa Nelson was born November 22, 1927 in Yale, South Dakota the daughter of Emil and Emilie (Musolf) Lemke. As a young child they moved to Spring Valley, MN where she graduated high school. Leona married Alan Nelson on July 26, 1947 and they made their home in Austin, MN. In 1952, they moved to Rochester, MN where they raised their family. Leona also worked as a clerk for 30 years at Snyder Drug Store. She was a member of Gloria Dei Lutheran Church and active in quilters guild. She enjoyed sewing, stamp collecting and traveling.

She was preceded in death by her husband, Alan; infant daughter, Judy; son, Richard; parents; one sister, two brothers and adopted grandson.

Service will be livestreamed on Ranfranz and Vine Funeral Homes Facebook page at the time of the service.

Ranfranz and Vine Funeral Homes is honored to be serving the Nelson family. To leave a special memory or condolence and read the complete notice please visit www.ranfranzandvinefh.com

Someone has supported the family by purchasing them flowers or gifts from the Healing Registry.

Gatherings were always more fun when Leona was there. Her spunk and adventurous spirit showed us the best way to age gracefully. Love you, Leona!

Aunt Leona was always a joy to spend time with at a Family Get Togethers, weddings, graduation, picnics, etc. She will be deeply missed. Our Condolences to the Nelson Family and the extended Lemke relatives.

Leona touched the lives of many people. She made everyone she met feel special regardless of their age. She was a gracious lady always smiling and looking her best. A special lady!

Leona was a gift to all of us. She always had a smile or a laugh that made everyone around her feel special. We loved hearing about her travels and the funny stories about her adventures. She is now in heaven sewing blocks and cheering on the baseball team. We love you, Leona.

Leona was a very special lady. I remember, as a child, hoping that a member of her household would draw my name for the Lemke Christmas gift exchange because Aunt Nonie would always know what a young girl liked. In my adult years, Leona was a source of inspiration. No matter what adversity she faced, she always had a smile and a chuckle that I will always remember. Nothing seemed to get her down. What a strong independent woman you were, Leona. You will be greatly missed!

I worked with Leona at Snyder's Drug. For her 50th birthday I found 50 pennies, one from each year of her life, and pasted them into the shape of the number 50 as a gift along with a card. She was always a joy - I was a mere highschool student trying to make some money for college but felt like Leona and many others of the full time employees were adopted family. I send my deep sympathies and wishes for peace. -Sacha (Kolb) Nelson

Going to miss you Aunt Leona. I always enjoyed talking with you and loved your sense of humor. You are now with Jesus and you know the love and the peace that we can only imagine. I love you.

I worked with Leona at Snyder’s for a few years in the 1980s. Still remember her talking about shoveling her roof in the winter. She gave me an old tube radio from her basement one day. Lovely lady.

I have fond memories of “Noni” tucking me in as a child when I stayed at my Grandma and Grandpa Richardson’s house. Except for the addition of her red seated walker in her later years, she never seemed to age. I always looked forward to visiting with her at family gatherings. She was so sharp and full of great stories. Godspeed Leona. You will be missed.

My Aunt Leona was a wonderful person. I enjoyed having her visit Houston Texas so we could take her to an Astros baseball game. Leona enjoyed sports. I will miss our telephone conversations.

The attached photos are added to the memorial of Leona Louisa Nelson to help share their legacy.

Thank you for sharing your memory of Leona