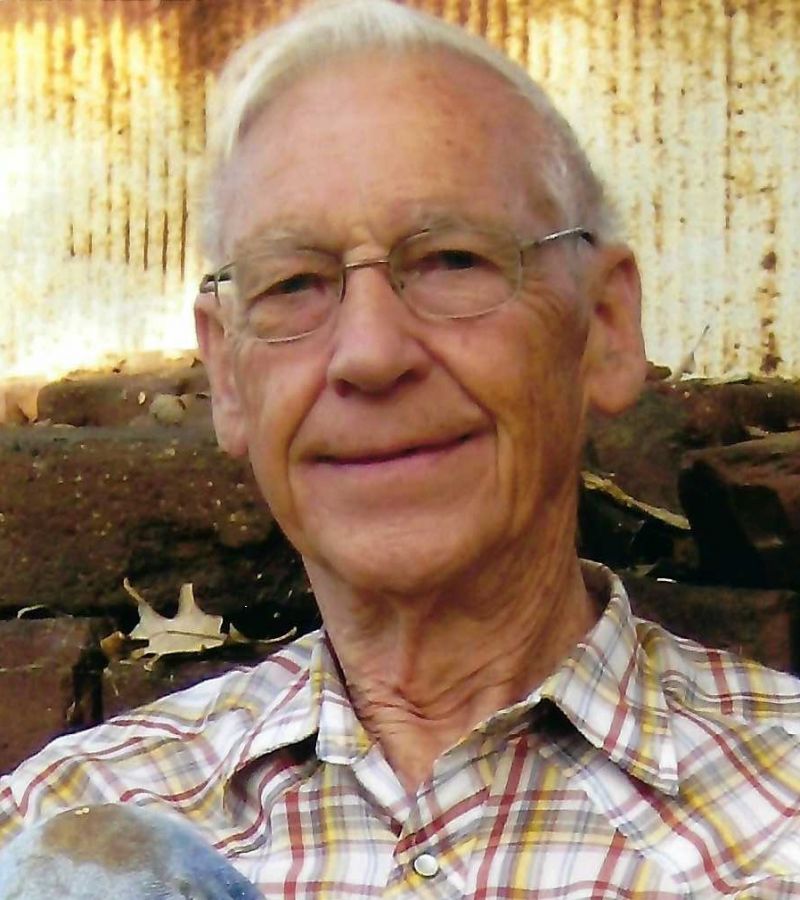 Harleth Swanson, known as Whitey, passed away on December 16, 2020. He was born on February 7, 1929 to Ruth (Schlekau) Swanson and Oscar Swanson in Ishpeming Michigan. Early in his life, he moved to Minnesota and attended school in several towns due to his father's job as a superintendent. Their move to Mazeppa Minnesota was significant. This is where he met his life long love, Donna Judd. He graduated from Pine Island High School and went on to attend college in St. Cloud MN. He studied accounting and played football in college. Sports were a major part of his life from high school through college. Donna and Whitey were married on Nov. 22, 1950.

He loved his family and was deeply proud of them. He never missed a game or dance competition that his daughters or grandkids participated in and he could often be heard cheering the loudest in the stands. He and Donna were able to build a successful life that they loved. He had 2 daughters, Jackie and Kris and together the family traveled extensively and built a cabin in Shell Lake Wisconsin. His travels took the family from Canada to Mexico and all around the United States, often as road trips. He especially loved downhill skiing trips out west. As time went on, these trips grew to include his daughter's families as well. Family time was the best time for Whitey.

His family is equally proud of him as he was of them. He had many accomplishments which included working for IBM as a programmer for 33 years and being one of the founding fathers for the IBM Credit Union in 1961. He continued on the board of directors for the Credit Union which eventually became Think Bank. After his retirement from IBM in 1989, Whitey continued to be involved with the Credit Union and he and Donna continued to travel and take trips. He also spent a great amount of time with his family, helping them out in any way possible.

Whitey was always in motion and he usually could be found outside gardening, mowing the lawn, or picking up sticks. The only time you could consistently find him sitting down and relaxing was when he was captaining boat rides around the lake.

Whitey is now reunited with his love, Donna. In addition to Donna, he was preceded in death by his parents, Oscar and Ruth (Schlekau) Swanson, sisters Fran (Ernie) Anderson of Roseville, MN and Ellen (Johnny) Scheuneman of St. Paul MN, brother Reuben (Irene) Swanson of Bloomington, MN. He is survived by his daughters Jackie (Mike) Curry and Kris (Eric) Mickelberg and his grandchildren Nick (Anna) Curry, Libby (Andrew Zeman) Curry and Rosalee (Aaron) Kukuzke and his beloved dog Rocky.

Ranfranz and Vine Funeral Home is honored to be serving the Swanson family; to share a special memory or condolence please visit www.ranfranzandvinefh.com

hubby and i played ibm softball under the umpireship of whitey. he was a fun guy, and we still talk about those good ole days.

love, light, and healing energy to your family, whitey. they, and we, will miss you 💗🌞🙏

Was on the IBM Federal Credit Union and later Think Credit Union board of directors with Whitey always appreciated our relationship. Prayers and thoughts are with his family

SO sorry to see Whitey's passing. We worked together WAY back in the 80's in programming and I think we played cards at noon for awhile. After our retirements we kinda went different ways . As we lived in rural Chatfield.
Rod Herrick

Deepest condolences to Harleth's family. When I was working at theFirst National Bank, I connected with Harleth quite frequently.
Ben de Wit

Prayers and thoughts are with Whitey's dauthers, Jackie and Kris. Whitey and I were both on the IBM Federal Credit Union, later Think Criedit Union for a number of years I always enjoyed our relationship both in and out of the board room...

Whitey was always a gentleman. He was kind, caring and a go-getter! He is now re-united with his love, Donna. Rest in peace, dear Whitey.

I will always have fond memories of the happy times we shared at Shell Lake. It was there that close bonds were formed between both the parents and our children. Rest In Peace Whitey.

The services for Harleth have not yet been added. Please sign up below to be notified when the services are ready.

The attached photos are added to the memorial of Harleth Swanson to help share their legacy.

Please help memorize Harleth Swanson by recording your attendance below.

Thank you for sharing your memory of Harleth