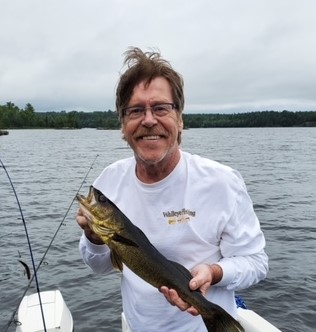 Randal Valentine Karasch, Le Center, Minnesota, went to his eternal home on December 17, 2020 after a relentless battle with cancer. Randal "Randy" was born the son of Valentine and Dena (Knutson), Karasch in St. Paul, Minnesota on May 10, 1957.
He grew up in Eagan, Minnesota before his family moved to Madison, Minnesota in 1968 when his parents purchased a hotel and café. After two years, his mom bought a home in Cannon Falls, Minnesota where she raised her five children.

Graduating from Cannon Falls High School in 1975, he furthered his education while studying law enforcement and emergency medicine for two years at Inver Hills Technical College.

Randy had a one-year employment stint with the Cottage Grove Police Department before realizing his passion for emergency medicine. For three years Randy was employed by an air and ground ambulance service, two in Rochester, Minnesota and one in Reno, Nevada.

In 1980, he took a position, as the Director of Metro Paramedic Ambulance Service in Denver, Colorado. This is also where he met the love of his life, Janet. They were united in marriage on April 18, 1981 in Golden, Colorado. Randy and Janet were blessed with three children; Randy, Joshua and Jessica.

The family moved to Baudette, Minnesota, on the Canadian border in 1983 where the family purchased Gearhart's Resort. For ten years, one of Randy's greatest joys came when some of his former teachers from Cannon Falls would book a fishing trip at the resort. It became an annual event.

Randy and his family moved to Farmington, Minnesota in August of 1992, residing there until February, 2007. They relocated to their dream home overlooking Lake Volney near Le Center.

Randy spent 17 years at Mystic Lake Casino in security and as an emergency medical supervisor and trainer. His final employment, before becoming ill, was with Securitaus in Normandale.

Randy loved his wife Janet, their children, grandchildren, siblings, brothers-in-law and family, fiercely and with all his heart. His grandkids were his pride and joy. His face lit up with such happiness when he was with them and when speaking about them.
Randy selflessly volunteered for over thirty years with The Salvation Army, many of those hours were alongside his wife Jan.

Even through his illness, Randy loved to spend time on a lake fishing or huddled in an ice shack.

Without hesitation, Randy would be the first to give of his time and efforts to help out family or friends with whatever needed to be done. His sense of humor kept everyone on their toes.

My words cannot convey the sympathies I feel for the loss of Randy. I worked with Randy for many years at the casino, and was first introduced to him through a mutual friend, Bob Roen. I was saddened to hear of Randy's passing. My thoughts and prayers are with his family. I pray that God surrounds you with His love and peace, and gives you strength.

Was so very sorry to hear of Randy's passing today …. He certainly did have a wry sense of humor and gave one pause to know if he indeed was "kidding" or not … enjoyed having him here in security at Normandale Lake Office Park and could always count on him when needed. Our thoughts and prayers go out to you all as you navigate this very difficult time. Tjody Jacobsen (management office of NLOP)

The services for Randal have not yet been added. Please sign up below to be notified when the services are ready.

The attached photos are added to the memorial of Randal Valentine Karasch to help share their legacy.

Thank you for sharing your memory of Randal