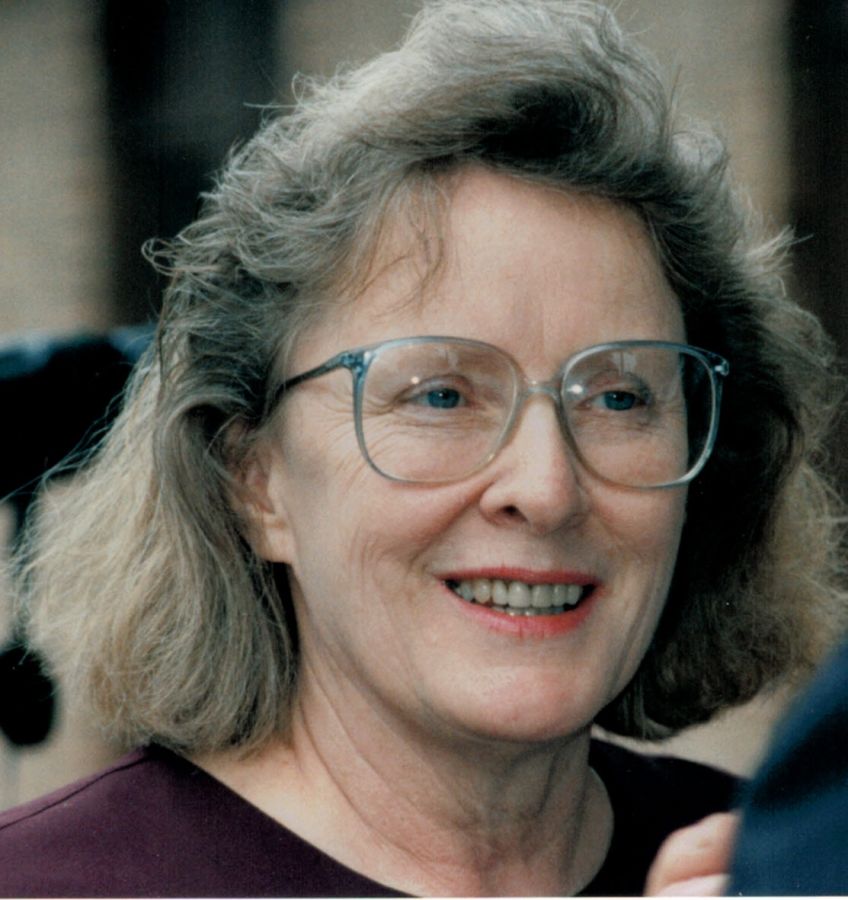 Jane Estelle (Rengo) Flickinger passed away peacefully at home on Tuesday, May 25, 2021. She was 85 years young. She was a wonderful mom, grandma, great-grandma, teacher, nurse, and friend. She was kind, patient, generous, and often hilarious. She was proud of her Finnish heritage, and she embodied "sisu" for all of us.

She designed and sewed clothing for the family. Jane was a good cook and baker and passed her skills to her children. She made her own wine, jams, jellies, and canned all the vegetables from her expansive garden. She enjoyed organic gardening and yoga. She loved needlework including knitting, crocheting, embroidery, and crewel work. She made special blankets for her grandkids, which most of them remember and many still have. She was an intelligent woman of many talents and taught her children to be curious about the world. The house was filled with books and music, laughter, and the wonderful smell of homemade food and baked goodies.

Jane was raised as an only child of Einard and Elvi Rengo. Her half-brother, Arne Rengo was 17 years old when she was born. Her older sister, Ayla, died at birth. Jane was very close to her many cousins who lived nearby.

In the seventh-grade, Jane won the state spelling bee and flew to Washington, DC, to represent Minnesota in the National Spelling Bee held May 25-29, 1948.

Jane moved to the Twin Cities after high school and earned her nursing degree at Swedish Nursing School. She went on to finish her bachelor's degree in nursing at the University of Minnesota. Jane worked as an RN in Minnesota and California. When she and Gerry moved to Rochester, Jane started working at Methodist Hospital (now part of Mayo Clinic Hospital). Jane worked as supplemental staff doing private duty at first and later as part of the float pool from 1963 until 1997, when she took a part-time post in Orthopedics at Methodist where she worked until 2005. Due to her many years of service, she was a member of the Mayo Clinic Argent Society.

In 1972, with five children 10 years old and younger, she began teaching nursing full time at Rochester Community College (now RCTC) while simultaneously pursuing her master's degree at the University of Minnesota. (She was grateful for the Civic League Day Nursery at a time when childcare outside the home was unheard of.) She retired from RCTC in 1997 to spend more time with her family and grandchildren. She would often encounter former students over the years, including when she was in hospice care. She was grateful to know she was in good hands.

Jane married Gerald Flickinger in 1960, and they were married for almost 50 years when Gerry passed away in 2010. She and Gerry had five children who survive her: Lynn Flickinger (Steve Hanna), Dawn (Greg) Saterdalen, Rob (Beck) Flickinger, Michelle Flickinger (Aaron Gordon), and Al (Amy) Flickinger.

She was thrilled to be a great grandmother to: Francis and Grace Mejia-Martin.

The family extends their gratitude to Dr Ericka Tung, Mayo Clinic Hospice, Home Instead Senior Care, and Above and Beyond Senior Services for caring for Jane at the end of her life. Special recognition to Amy Sund, Desiree Lanzino, Cassi Princino, Hannah Stoner, and Karen Johnson. We are grateful to Lynn and Steve for taking Mom into their home during the pandemic and caring for her at the end of her life.

An open house to celebrate her life will be held from 1-4pm Sunday, May 30th, at Ranfranz and Vine Funeral Homes. A private interment ceremony will be held at a later date at the Bethel Lutheran Church columbarium.

Memorials are preferred to Mayo Clinic Hospice, Paws and Claws Humane Society, Gillette Children's Hospital, or a charity of the donor's choice.

Ranfranz and Vine Funeral Home is honored to be serving the Flickinger family; to share a special memory or condolence please visit www.ranfranzandvinefh.com

What a wonderful picture of Jane. Just as I always remembered her. She was a nursing instructor of mine back in the late 70s . I would run into her many time while working In orthopedics after I graduated. I admired that she was a working nursing instructor so was able to give us all real life first hand experience. Jane was a very kind soul, smiling every time I would cross paths with her. She instilled a love of nursing not only in me, but many of the students who were privileged to be under her guidance. Bless her for all the nurses she started on the right tract to be caregivers for others. God now has another beautiful, kind caring angel to help him watch over all of us back here on earth.

The attached photos are added to the memorial of Jane Flickinger to help share their legacy.

Please help memorize Jane Flickinger by recording your attendance below.