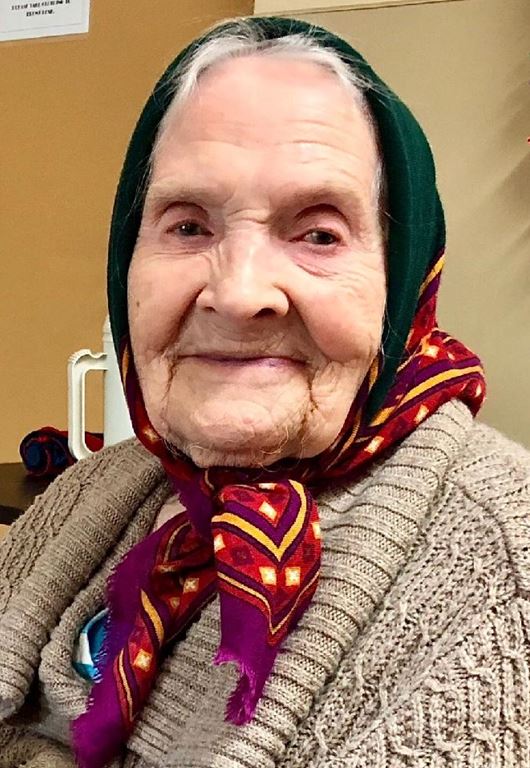 Eugenia Woroncow, a longtime resident of South River, NJ, passed away peacefully on Thursday, June 3, 2021, at the age of 102, at Fairview Care Center in Dodge Center, MN, where she had lived since 2012.

Eugenia Anisimovna Kuzmenkova was born on November 15, 1918 in Demidov, Smolenskaya Oblast, in Russia: a region which was later occupied by Nazi troops during World War II. Eugenia married Timofei Woroncow during the war and escaped the area, ultimately finding passage to America. They settled in South River, NJ in the company of others who had also been sheltered in refugee camps in Germany following the war.

Eugenia was a remarkable seamstress and spent many years working in various sewing factories, including Wilshire Fashions. She was an avid gardener, and also enjoyed cooking, baking, crocheting, home projects, and reading her Bible on Sundays, her day of rest. Above all, she loved when her granddaughters came to visit from Minnesota. Eugenia and Timofei were devout founding members of St. Euphrosynia Byelorussian Orthodox Church in South River, NJ, where she never missed a service. Father Mark Muñoz of Holy Anargyroi Greek Orthodox Church in Rochester, provided spiritual care after she moved to Fairview Care Center to be near her daughter.

If you are so moved, donations in Eugenia's memory may be given to Revolutionary Earth Farm, a volunteer-led food charity in Rochester, MN at revolutionaryearth.org

The attached photos are added to the memorial of Eugenia Woroncow to help share their legacy.

Please help memorize Eugenia Woroncow by recording your attendance below.