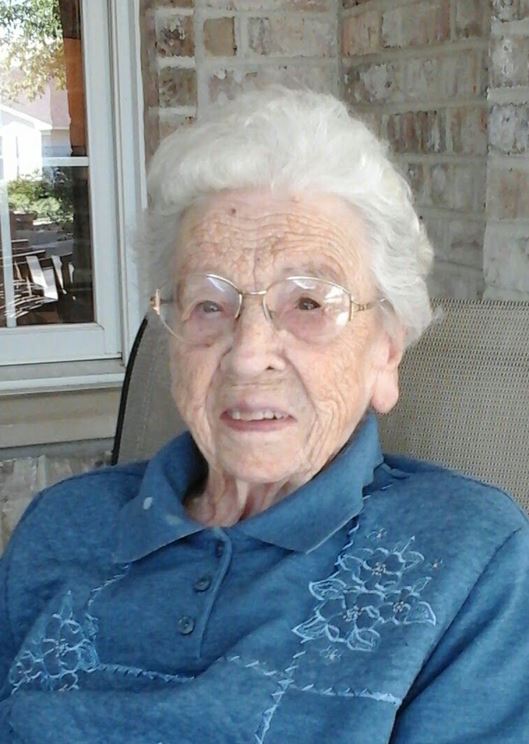 Elizabeth (Liz) Dale 103, Rochester, MN, was taken from this world to her eternal heavenly home, prepared for her by her Savior, Jesus Christ, on June 29, 2021 at Madonna Towers Skilled Nursing Care, Rochester, MN. A funeral service will be held at Our Savior's Evangelical Lutheran Church, Albert Lea MN, on Friday, July 2 at 11 a.m. Visitation will begin one hour prior to the service at 10 a.m. Officiants are two of her grandsons, Rev. Timothy Nass and Rev. Nathan Nass. Internment will be in Scarville Synod Cemetery, Scarville, IA.

Elizabeth Frieda Louise Sprenger was born December 18, 1917, to Charles and Alvina (Wittmer) Sprenger in Conger, Minnesota. Elizabeth was made a child of God through Baptism on January 6, 1918. On March 20, 1932 after receiving religious instruction, she publicly professed her faith in Christ and in the teachings of the Lutheran Church and became a confirmed member of Concordia Lutheran Church, rural Albert Lea, MN, under the instruction of the Rev. H.F. Pfeiffer. She spent her first eight years of public education at the Conger Grade School, graduating from District 140 of the Rural Schools of Freeborn County, MN, in July, 1931. She graduated from Albert Lea High School in 1936.

After high school Elizabeth helped care for her elderly grandparents and did part-time bookkeeping for several businesses in Conger: Conger Stockyards, Conger Bank, and Sprenger Lumber. She also registered men for active service duty in World War II. Despite being only in her mid-20's, she assumed management of Charles Sprenger Lumber Co., the family business established by her father, after her father suffered a disabling injury at work and both of her brothers were serving overseas in World War II. She successfully kept it open and thriving for over two years until her brothers returned from service.

On December 10, 1950, she married Clifford J. Dale of Scarville, IA, at Concordia Lutheran Church rural Albert Lea. They made their home in Conger and were blessed with four children. Liz was a full time homemaker who enjoyed baking, cooking, crocheting, sewing, ceramics and traveling with friends. Widowed in 1973, she lived in Conger until November 1999, when she moved to Rochester. There she established new friendships, spent many hours playing games with her grandchildren, and watching Minnesota Twins baseball. She was faithful in reading her Bible and daily devotions study. She was a member of Our Savior's Lutheran Church, Albert Lea, while residing in Conger, and then Resurrection and Life Lutheran Church, Rochester, after moving to Rochester.

Such a sweet and loving person. She will certainly missed by so many! What a beautiful life she lived …103 is quite a feat!! Angel on earth and now in heaven. 🌈♥️

The attached photos are added to the memorial of Elizabeth F Dale to help share their legacy.