Bruce Leonard Pearson died at St. Mary's Hospital on the Mayo Clinic Campus on July 14, 2021. He was born on April 30, 1932, in Indianapolis, Indiana where he spent most of his childhood and remained a fan of the Indy 500 races all his life.

Bruce graduated from Earlham College in Richmond, Indiana with a B.A. in 1953. He served alternative service as a conscientious objector under the auspices of the American Friends Service Committee in Japan, where he taught English and spent summers working on field projects and in orphanages. Upon returning to the states, he taught in Shortridge High School in Indianapolis, pursuing a degree in Linguistics at Indiana University during the summers. He was awarded an M.A. in 1963. He then accepted a position at Earlham College as an administrator and faculty member. The college was developing the Conner Prairie Pioneer Settlement, a living history museum built around the homestead of William Conner, one of the state's pioneer settlers. Bruce's focus on the settler was quickly eclipsed by his interest in the Delaware Indians, with whom Conner had grown up. With his study in languages and the seeds of culture embedded within grammar structures and vocabulary, Bruce decided to pursue a doctoral degree at the University of California at Berkeley. While there he began research on the Delaware language. On completing his degree in 1972, he accepted a faculty position at the University of South Carolina to teach linguistics and other anthropology courses, retiring in 1997 as professor emeritus. He worked throughout his academic career on Delaware and Shawnee, both members of the Algonquian language family.

In 1994 while speaking at a conference on the Historic Tribes of Tuscarawas County, Ohio, Bruce met Jim Bland, then the second chief of the Wyandotte Nation, who asked him to help the tribe to preserve their own language, a member of the Iroquois language family.

Throughout his life, Bruce was a member of the Religious Society of Friends (Quakers), which was evident by the Friends' testimonies of simplicity, peace, integrity, community, and equality in his interactions with the rest of the world. He worked tirelessly against the death penalty and was a volunteer teacher for South Carolina's death row inmates. He protested, spoke and wrote letters and articles, and persistently lobbied for a just legal system. He loved baseball and umpired for many years for the Dixie Youth Baseball League. Upon retirement and moving to Bloomington, Indiana, Bruce was a volunteer teacher in the local jail. He also acted in community theater, wrote plays for First Day School, and produced an opera about death row, for which he wrote the libretto. He attended every opera and musical production at Indiana University.

Bruce is survived by his wife of 32 years, Julia; children: Sarah Columbus, Thomas (Tracey) Pearson, Cresta (Colleen Coulter) Cates, and Kate (Nicholas) Remmes; and grandchildren: Paul, Alison, and Amy Columbus; Atlee (Miranda) and Tanner Pearson; Solomon and Lyle Cates, and Liam and Keegan Gabauer; Genevieve and Duncan Remmes; his sister, Susan (Kenneth) Steeves; and the Knox brothers- and sisters-in-law as well as many nieces and nephews. A special companion and gentle joy for the past seven years has been his beagle, Suki.

He was preceded in death by his parents Leonard and Hildred Pearson; his sisters Nancy Drew, Betsy Caulfield, and his brothers-in-law Richard Caulfield and Walter Knox; nephew David Caulfield; and son-in-law Joseph Columbus.

A memorial and celebration of Bruce's life will be held at a later time. Till then, toast his presence in the world with a glass of local wine, sushi, and a game of miniature golf or Trivial Pursuit. In lieu of flowers, please send memorial donations to the American Friends Service Committee or Earlham College.

I attended Columbia Friends Meeting for many years, becoming a member in 1994. I was always impressed by Bruce's calm wisdom and gentle sense of humor. His spoken messages during Meeting for Worship always helped me to become more centered, and led me to much personal reflection. I have not been attending Columbia Meeting for the past few decades, having moved to Jacksonville, Florida in August of 2000, and then to Worcester, Massachusetts in June of this year. But I fondly remember Bruce.

Love you Uncle Bruce - I have many good memories and stories that I cherish. Thank you for being my uncle. Francine

Bruce and others after a symposium in 1995. He is in second row from top on left side.

Oh dear. So sorry to hear this. Bruce was sweet, brilliant, and humble, and he had a good sense of humor. I admired his sense of playfulness and creativity, and his marriage to Julie was clearly a very big and special love. The Pearsons had me over to their home many times when we lived in Bloomington and I always enjoyed their company. Bruce was a great person and definitely did some lasting good in his time on Earth. Holding your whole family in the Light, Julie.

Sincere condolences from South Carolina. Bruce was one of my original linguistics colleagues here at the University of South Carolina, and he did much to establish and anchor the program in its early years (coming to the program not long after it was established.). I only got to know him in my first 6 years of being here, and we missed him after he retired in 1997. We will continue to remember him for his generosity, his kindness, and his collegiality. - Stanley and Melissa Dubinsky

Julie and Bruce walked in the Light as humane beings, with those they taught, served, and loved. Their mutual devotion to each other, the least. the abandoned and oppressed is written on our minds and hearts indelibly.

My husband and I had the pleasure of getting to know Bruce and Julie when we attended Rochester Friends Meeting during my husband’s cancer treatment at the Mayo Clinic a few years ago. Since then, we got to know Bruce and Julie a lot better as they graciously opened their home to us during my husband’s frequent return check ups at Mayo. Bruce was such a sweet, sweet man, with the most gentle spirit. Even when I called and talked to him in the hospital the day before his passing, he was a perfect gentleman and I could feel his gentle spirit through the thousand+ miles that separated us physically.

Bruce, I will miss you, as so many others who have had the good fortune to share precious moments of your long and well-lived life will do also. Rest in peace and love, till we meet again.

Julie, I have never met a wife as devoted as you were to Bruce. You have taken care of him with so much love and patience, for such a long time. I hope you can finally take some time to take good care of yourself now. Let’s plan that long overdue trip soon!

Bruce lived a life many of us could wish to emulate: his gentleness might have been mistaken for weakness, but his mind was brilliant, his spirit strong, his voice always raised on behalf of those who needed a clear and passionate advocate, and his heart faithful to the end. Rest in power, Bruce! So much love and gratitude to Julie, his true helpmeet and companion in all good. I weep with you in sorrow, and in joy that Bruce lived and lives still in the many lives he gladdened. 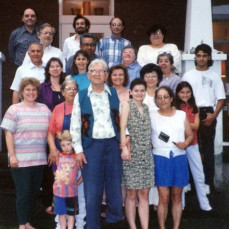 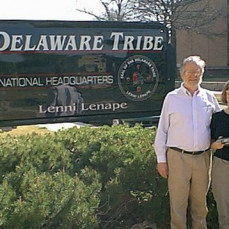 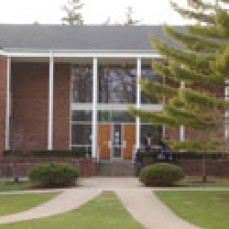 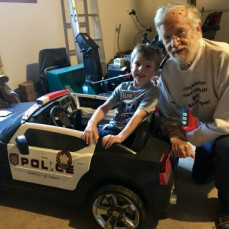 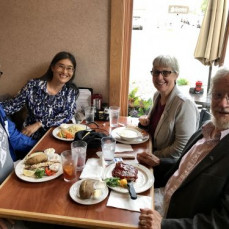 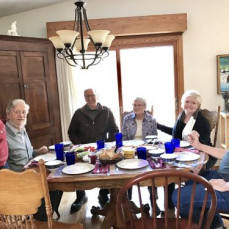 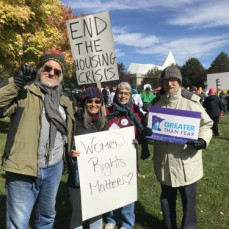 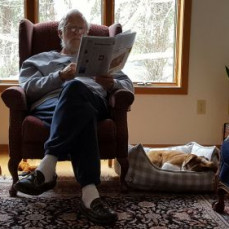 The attached photos are added to the memorial of Bruce Pearson to help share their legacy.

Please help memorize Bruce Pearson by recording your attendance below.