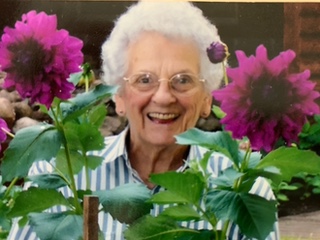 On January 11, 2022 Mary Elizabeth Scholbrock gracefully transitioned to her new life in heaven after living on earth for a blessed 98 years.

She was born to the late John and Wilhelmine (Petersen) Ludvigsen in Sheldon, Wisconsin on December 31, 1923.

She was married to Walter Scholbrock on November 7, 1944. Mary was the last surviving sibling in a family of eleven. She was number eight preceded by Preban, Milton, Ellen, Leo, Elsie, Florence, Clarence and followed by Gladys, Calvin and Paul.

After graduating from Tony High School in 1941 she moved to Chicago, IL for employment at Bell and Howell making lenses for the military effort during WWII. In Chicago she met her handsome Iowa farm boy, Walter, with whom she would spend 70 years working side by side in the Star Oil Company, Sheldon, WI and later the State Bank of Gilman, WI from 1968 to 1982 at which time they retired to their lake home in Hayward, WI. For many years she spent the winter months in Harlingen, TX and traveled the world with Walt until his parting in 2014.

While college was not an option for Mary or Walt, both were very bright, having graduated at the top of their respective high school graduating classes. Both valued education supporting their children and grandchildren in earning multiple and varied degrees.

Ranfranz and Vine Funeral Home, Rochester, MN is honored to be serving the Scholbrock family. To share a special memory or condolence, please visit www.ranfranzandvinefh.com Her family will conduct a celebration of life and a private burial ceremony at Woodlawn Cemetery, Sheldon, WI in the summer of 2022.

Dear Al,
I just read Mary's obit in the Sawyer County Record and Pat Raven also told me. Please know you have my deepest sympathy and condolences. Sincerely, Laura Urban

Dear Al,
My sincere and warmest sympathies to you. You were so fortunate that your mom lived such a long and good life. Saying that she was “an extraordinary mother” is a wonderful epitaph but even that hardly depicts her many quiet talents and accomplishments. So characteristic of the best of the “greatest generation”! Reading her obituary brought a few tears to my eyes both for your loss (and your family’s) but also because in so many ways she reminded me of my mom. They would have been friends, I know.

Of course I never had the opportunity to meet her, but that photo of her is a wonderful remembrance. You have her smile.

With love from your old friend,
Rosemary

Sorry to hear about your mom. She was a great gal. I was happy to know her. She had a good run and a great life.
Don R

Dear Al and family, so sorry to hear. We are glad she died peacefully. She was a great lady and I enjoyed the times that we had together. Thank you fiorsharing and know we think of you all often.
Love and friendship always.
Tim and Nan

I had no idea until I received your email that Mary just passed away today. I must admit I am so sad. She was so special to me.

For some reason she was heavily on my mind recently and I just sent her a Christmas card and Birthday card. She was a very important person to me in my life and I feel honored to have known her.
I did not know that Mary was in hospice. I don't go on Facebook very often but will look it up now under your name.
Mary was so fortunate to have all of you as her loving family You all meant everything to she and Walt and they would forever talk fondly about their children and grandchildren.

Thank you for sending this notice to me. I will look for your notice as to the services for Mary in the summer of this year.
I am sorry for your loss as well. It is really tough no matter what the age we may be as the children, to lose our parents. Somehow they still have that umbrella of parenthood over us whether they are active or not. It is an empty feeling when they both pass and that connection is gone, I found that our love for them is endless and somehow I still wish I could call them or ask their advice.

The picture of Mary is beautiful and a very lovely obiturary.
God Bless your entire family.
Pat

My sympathy to all of you. She was so talented and there was nothing she did not do well.

Sorry to hear about Mary's passing. Two things I will always remember her for are her love of gardening and baking. She always remembered I liked lemon meringue pie and had one waiting whenever we visited in Rice Lake, and then she wanted to show off her garden if it was summer.

I will remember Walt and Mary in my prayers for many years. They were truly special people.
Friends for Life,
Leonard

Very sorry for your loss, Bro. Your parents were great, always made me feel welcome in their home.

No matter how long you know a loved one is nearing the end, the reality of the actual passing still hits you where you live. A Celebration of Life is an excellent way to say goodbye in my opinion. Happy and sad memories shared with friends and relatives, some tears, some laughter, lots of healing.

So sorry to hear of Mary's passing. She was a neat lady and a true survivor. I enjoyed the relationship I had with her during my college stay at the Scholbrock's home.
Gil and Barb

I am sorry about your Mother’s passing, you have my best regards. Your folks were wonderful people. Ted

My aunt was always kind and generous to me and I will never forget her.

The attached photos are added to the memorial of Mary Elizabeth Scholbrock to help share their legacy.