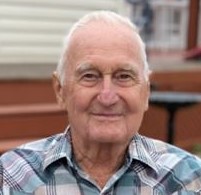 Eugene "Gene" K. Schueller, age 90, passed away peacefully with his family by his side on Friday, May 27, 2022 at St. Mary's Hospital in Rochester, Minnesota.

Eugene Kenneth Schueller was born September 19, 1931 in Dent, MN to Herman and Frieda (Hoffmann) Schueller. At the age of 4 months, the family moved north to rural Kelliher, MN. He was baptized on October 16, 1931 and confirmed on August 20, 1945. His father passed away when he was 4 years old. He went to Shotley Country School through the 8th grade and graduated from Kelliher High School in 1949. Gene enlisted in the United States Air Force on October 20, 1950. He was stationed at Lackland AFB Texas, Wichita Falls AFB Texas and Travis AFB Fairfield, California. In November 1951, he made corporal, 1952 Airman 1/class and was honorably discharged on October 20, 1954 with the rank of Staff Sergeant. Following the service he attended meat cutting school in Toledo, Ohio then moved to Rochester, MN and worked as a meatcutter at Roth's Foodtown. He later worked for Rochester Park and Recreation until his retirement in October 1994 at the age of 66.

Gene met and married Evelyn "Evie" Tabor at Gloria Dei Lutheran Church on May 19, 1957. They were blessed with five children and sixty-five years of marriage. Gene loved gardening and raised huge raspberry beds, tomatoes, pumpkins and sold many! He did quit the raspberries in 2017. He really enjoyed playing poker with his friends and visiting (lots of visiting). He loved his children and grandkids.

Funeral services will be held 1:00 PM Tuesday, May 31, 2022 at Gloria Dei Lutheran Church, 1212 12th Ave NW, Rochester, MN. Visitation will be held one hour prior to the service at the church. Interment will be at Pleasant Prairie Cemetery, Rochester, MN with full military honors.

Ranfranz and Vine Funeral Home is honored to be serving the Schueller family. To share a special memory or condolence, please visit www.ranfranzandvinefh.com

Schueller Family, I am very sorry for the loss of Gene. I had the chance to work with him at the Park and Rec for a Summer. He was a great character displaying a quick with and humor. He recognized me for years after. I also enjoyed is down to earth nature and great story telling. RIP Gene.

A few years ago, maybe 5 or 6, we drove by Gene's and there was a brown Ford pick-up with a swimming pool (in the box yet) sitting in the driveway with a For Sale sign on it. As I once owned a similar Ford truck we stopped and inquired only to find that the swimming pool was the only thing for sale. But we had such a nice visit. Year or two later, still nostalgic over the pickup, we stopped again. Well the pickup isn't for sale he says but we had another nice visit, knowing the same people in Viola and Gene showing us his gardens and large pumpkin patch. Over the years we would stop and finding him home would have more good visits (car flying through the air and landing on his driveway) and not even talk about the truck. The most recent was only two months ago. Just found the obit, this is a sad surprise. A genuine gentleman I was privileged to know, only for a brief time. Kevin Hammel

Jim sorry about the loss of your dad. Death sucks. Hope your memories help with the healing. Take care Tom Brooks

May comfort and peace be yours today and always. With deepest sympathy at this time of sorrow.

Oh man. I'm talking with my Mom, and she told me that you had passed. Sorry to hear of your passing. I remember us bantering back and forth when I worked for 1 season with the Park & Rec. Dept. You're a good man, and I've met you a couple times since then. R.I.P. my friend! You lived a full life! I will try to be there tomorrow.

Gene was my mentor, he taught me and all of us at Park and Rec how to work get the job done and have fun doing it. We work together on and off for over 40 years. In the winter time I would call him up at 4 a.m. to come in and plow snow. His response was I was hoping you would call I will be right in. Even after both of us had retired he would call me up after a big snowstorm wanting to know if I needed him to come in and plow. He loved a good snow storm. Over the years I had the opportunity to get to know Evie and many of his kids, what a great family. I am saddened by his loss but grateful for the years we got to spend together. I will miss you my friend rest in peace

In talking with my grandma the past couple of days, Gene's sister RoxAnn, we've both talked about remembering all the fun times with Gene. He was always up to something and pulling pranks. I've heard lots of stories over the years....my personal favorite being him as a kid, pretending to be a bear while out blueberry picking with his mom Frieda, his brother Billy, and sister RoxAnn, to get out of picking blueberries.

One of my best summer time memories will always be picking up my grandma RoxAnn and road tripping down to Rochester each summer to spend a few days at Gene and Evelyn's. We've been going down there pretty much every summer for more years then I can remember and it's always been a lot of fun! Way back in 1991, I rode down to Rochester with grandma RoxAnn to visit and see her and Gene's mom, Frieda, who was at Mayo after having heart surgery. I don't remember all the details of the trip but I do remember going to some garage sales with Evelyn and grandma RoxAnn. For whatever reason I bought a white shawl and was wearing it around the house at Gene and Evelyn's. Every time I would set the shawl down, Gene (being the prankster that he always was!) would hide it, laugh, and tell me "oh you'd better put your shawl on cuz it's chilly!" egging me on to go and find it of course. This went on over the course of the past 30 years and every time I'd go down with grandma RoxAnn to visit, I had to bring the white shawl. I'd either wear it into the house upon arrival or bring it out at some point during the visit and appear in the living room wearing it. Gene would see it and just laugh and laugh. If I didn't get it out soon enough, he'd bring it up, telling me "you'd better get your shawl cuz it's chilly!" knowing full well that I always brought it with me, it was 'our thing'. Over the years, I can't count how many times he would hide that shawl when I'd be down to visit...or stick things in my shoes. It was always something, but it was always fun! As I type this, I can just hear his laughter ringing out when he'd see that shawl....and I'll always remember that as one of my very favorite summer time memories. 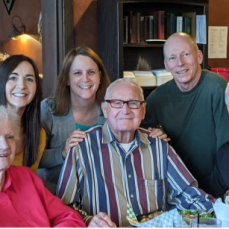 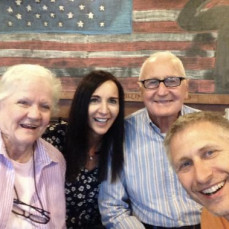 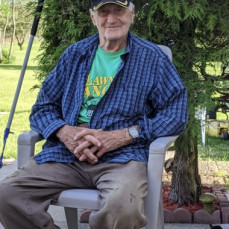 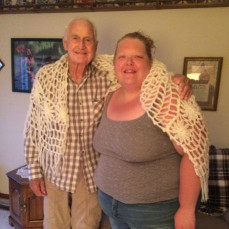 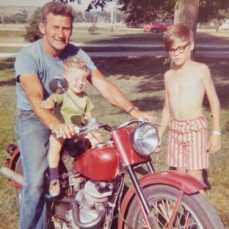 The attached photos are added to the memorial of Eugene Schueller to help share their legacy.

Please help memorize Eugene Schueller by recording your attendance below.