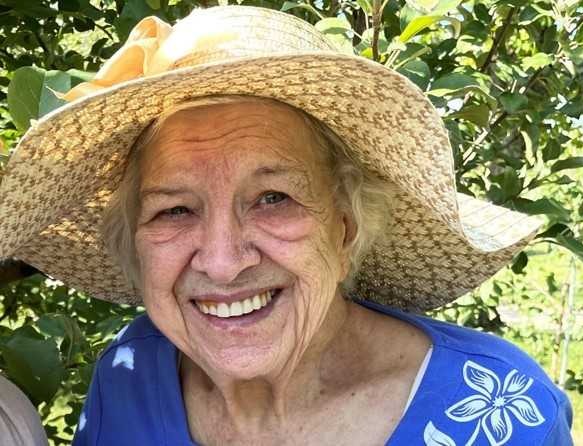 Luella Anna Clemons Long, Age 95, of Rochester, MN entered heaven on June 29, 2022 as she was surrounded by loved ones. Luella (a.k.a., the "comeback queen") gave up her earthly body as it finally succumbed to complications from cancerous tumors and old age.

She was a lover of Jesus, a Mother, a Grandmother, a Great Grandmother, an Aunt, and a friend to countless people thanks in part to her quick and droll wit, her infectious smile, and her compassion rooted in Christian faith.

Lu was born April 10, 1927 to parents Melvin and Emma (Clifford) Clemons in Greenboro, NY. She was the second youngest of nine children, two boys and seven girls. Legend has it that she is a distant relative of Samuel Clemens (note the different spelling of the last name), known by his pen name Mark Twain.

Lu attended the Greenboro Nazarene Church, where she was baptized and grew in her faith in Jesus Christ. She was a voracious student of the Bible with a lifelong desire to serve God.

When Luella was 16, her sister Thelma died during childbirth. Lu took on the duty of helping to raise Thelma's two children, Marcelline and Paul. She loved them like her own, a foreshadowing of things to come.

She graduated from Sandy Creek High School in 1944 and attended Eastern Nazarene College where she majored in French and foreign languages. Lu met John Marshall Long in Norfolk, VA, and they were married on November 24, 1960 in Salisbury, MD. They were married for nearly 59 years.

While living in Little Rock, AR, they adopted their first two children, Sam and Leigh. They adopted their third child, Paul, from a Nazarene adoption home in Denton, TX. "I don't believe that either my husband nor I could have loved a biological child any more than we love each of our children that we adopted," Lu wrote in a memoir. "God knew that we had a lot of love to give a child and I believe that He gave us that special love for each one of them. I am thankful for the amazing and tremendous responsibility of rearing each of the three. We depended on God to help us and I believe He did just that."

Luella and John moved to the Twin Cities, MN in 1971, where they raised their three children to adulthood. While there, Luella was a realtor, an entrepreneur, worked for the American Cancer Society and Aetna.

In 1993, John retired, so he and Lu moved to Murfreesboro, TN. Throughout their marriage an into retirement traveled extensively, to Europe, Japan, China, and South America to name a few. Lu continued to work at Middle Tennessee University, and made many new friends through work and her active participation at First Church of the Nazarene Nashville and Bel Aire Baptist Church in Murfreesboro. Lu also assisted John in authoring a book A Ribbon of Steel.

Lu was an accomplished businesswoman, a master typist and prolific writer. She outlived most of her family and lifelong friends made during her 95 years living in Upstate New York, Norfolk, Little Rock, Edina, and Murfreesboro. For those who are still here, we're heartbroken, but rest in the hope that she is reunited with her Husband in Heaven.

More than anything Luella loved Jesus first, and her husband and children only slightly less. She spread her love for Jesus and others in many ways, notably by posting daily hymn lyrics and bible verses on her Facebook feed. She sacrificed everything for her family, demonstrating to everyone she met what compassion looks like.

Mom, we are rejoicing in the hope that you are with dad and all your loved ones that have gone before you. May your greatest dreams of heaven pale in comparison to what you're experiencing now.

Memorials, in lieu of flowers, may be made to True Life Church in Rochester, MN.

Ranfranz & Vine Funeral Home is honored to be serving the Long family; to share a special memory or condolence please visit www.ranfranzandvinefh.com

While a bit older than I, I can say that my Father Granville was one that we, his kids, had to go visit will,at least a recognition of our for our forbears. That family was one of the greatest generation!

I always loved to see The Longs visiting Co-Co's! That meant I got to see Leigh, Sam, Paul and listen to stories of when my mom was young. Luella was an amazing lady that had a big impact in my life. We reconnected when I stumbled across Mike Compton's genealogy on line and he made the reconnect. Mom and Lu were cousins and Mom thought of her as a big sister. I know that Aunt Emma, GJ, Mom, Nelson, and all of the Clemons kids are there with John to meet her and celebrate her arrival. Leigh, Sam, Paul, and kids, know that your extended family thinks of you often. Love, Julie Stevens Lowe and kids.

Thoughts are with you all. Sorry for your loss. She seemed like an incredible woman

I have fond memories of John and Lu from Murfreesboro Belle Aire Baptist Church. We shared Sunday lunch many times and always tried to have a list of jokes we could share during that time. Old folks have a way of entertaining each other.

The attached photos are added to the memorial of Luella Clemens Long to help share their legacy.